There’s tough and then there’s Devin Logan. Clad in her red, white, and blue gear, the then 20-year-old slopestyle skier looked like a rocket on the launch pad, ready to ignite. 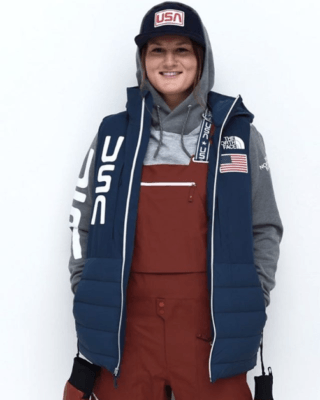 Any nerves in her head were displaced by DMX’s “X Gon Give It To Ya” blasting in her headphones. She double, then triple-checked her bindings. Bobbing back and forth to the beat, Devin looked like she was ready to eat the mountain’s lunch. And why wouldn’t she? Devin was moments away from her victory lap. Her first run score of 85.40 secured a medal at the 2014 Sochi Olympics and she was ready to give the crowd a show. Almost winking at the camera through her goggles, she plunged down the Russian hill and into the history books.

Silver medal for the skier from Vermont.

Everything she’d done led her to that moment. From early morning training sessions at the Mount Snow Academy to trying to keep up with her two older brothers (both professional skiers), her life had been on a two-ski trajectory. There’d been dips, kicks, and a ton of crashes along the way, but Devin never lost focus. She’s a champion who had overcome physical setbacks, only to keep coming back to push the limit.

Most skiers are lucky just to leave the lift and make it down the mountain without wiping out.

Slopestyle skiers do it differently.

Their idea of a perfect run includes rail slides, rodeo flips off big jumps, and landing a fakie 1260° from a cheese wedge. Devin and her fellow slopestyle skiers compete on a terrain reminiscent of Southern California skate parks. The slope is designed like a video game, where skiers take off from the top, navigate banks, berms, butter boxes, and rails. Competitors are scored on the following criteria: amplitude, difficulty, execution, variety, progression, and flow.

Devin is a master of combining speed, grace, tricks, and precision into every run. She is the first female skier in the world to compete both in the slopestyle and half-pipe at the Olympics. Her drive to keep taking her skiing to new heights earned her a spot on the 2018 U.S. Ski Team in Korea.

“After making the team, you can breathe a little,” Devin says. “It’s really cool going against your friends at the highest levels and pushing each other.”

Finding the highest of the highs often means overcoming the lowest of the lows. In 2012, Devin suffered a nasty tear in her anterior cruciate ligament and meniscus, plus two microfractures. With two years to qualify for the Winter Olympics, it was a grueling recovery. But she attacked rehabilitation with the same laser focus she commits to her skiing. 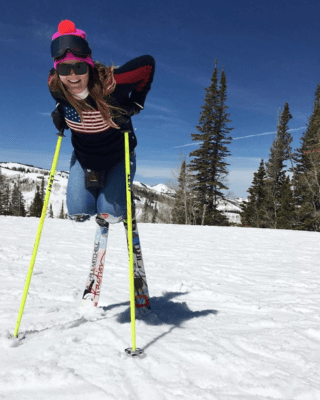 “As an athlete, your instinct is to get out there and compete,” Devin says. “It takes time going through an injury, and I knew when to push it and when to take a step back.”

Listening to her body, she came back stronger and committed to earn a spot on the U.S. Ski Team. A self-described “dirt eater,” she picks herself up after every fall.

It’s difficult to make direct comparisons from sport to sport, but you could make the argument that Devin is a boxer. She moves with equal measures of grace and brute force. There’s a swagger in her skiing. Checking her speed before hitting a jump or oiling on a rail, it’s reminiscent of a heavyweight loading up a straight right punch. And once she’s resolved to hit it, she hits it as good as anyone—pure power, no fear of consequences.

“I have an extra fire in me,” Devin says. “I want it more than you can imagine. I’m enjoying this moment, but I know I have more to give. That’s what you’re seeing out there.”

From the Judges’ Table

During her recovery in 2012, Devin needed something more than just physical therapy. She wanted a fuller appreciation of her sport. She became an AFP and FIS certified judge to develop a better understanding of skiing. From safety to scoring events, Devin remained active in the sport.

It was a perfect antidote to being sidelined for a year. Devin says she learned patience from the judges’ table. As someone who wants to experience every aspect of life, judging became a post-doc education for the future Olympian.

“What’s the difference between first and last place?” Devin asks. “Learning how to score events gave me a new perspective on how to be a better skier.” Devin’s life is a whirlwind of activity. Even her downtime is an adventure. She loves spending time with friends in the deserts of Southern Utah, exploring new hiking trails, and plotting her next ski excursion.

With skiing as her business, you’d think she wouldn’t enjoy hitting the mountains. Nothing could be further from the truth. She still loves the simple pleasure of carving fresh tracks and discovering what’s over the next horizon.

“You have to enjoy the moment,” Devin says. “Of course, there’s a smile on my face—if I didn’t want to be out here, I wouldn’t to this.”

The next Winter Games are in Beijing in 2022, and Devin plans to be there. She still has unfinished business with the half-pipe after finishing 15th in Korea.

“I’m more mature and ready to make the sacrifices necessary to win,” Devin says. “And I want it more than you know for the half-pipe.”

Why she trusts USANA: I’m super religious about what I put into my body, and I know USANA has the best products for Olympic-caliber athletes. 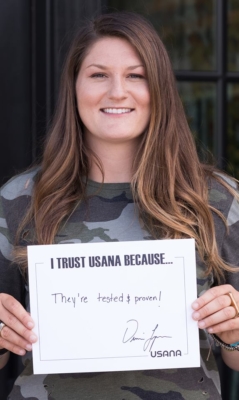 Her favorite USANA product: The USANA SportsPak. It helps me with travel, jet lag, and when I don’t get enough sleep. I also love the entire Celavive skincare line.

Why she believes sleep is important: You have to be rested to compete, and I’m a really good napper.

If she wasn’t a skier, she’d be: A cook. I’m definitely a foodie. I love eating my way through any country I visit.

What she’s listening to on the slopes: Music is everything to me. I love making a playlist before I ski. Right now, it’s a lot of DMX and Drake.

Some behind the scene facts about the Olympics: The committee hooks you up with tons of cool gear. You get village gear, and if you win you get to wear podium gear.

**Mentioned athletes are distributors or dedicated users who receive compensation for their partnership and/or complimentary @USANAinc products.