Kiss the Sky with Ashley Caldwell

Ashley Caldwell might live in the sky, but her feet are firmly planted on the ground. A three-time winter Olympian, her aerial feats are like that of winged creatures with equal measures of force and grace. And even through setbacks and challenges, Ashley continues to amaze with her dedication, focus, and unending search for the perfect jump.

Think about the scariest thing you can do on skis. 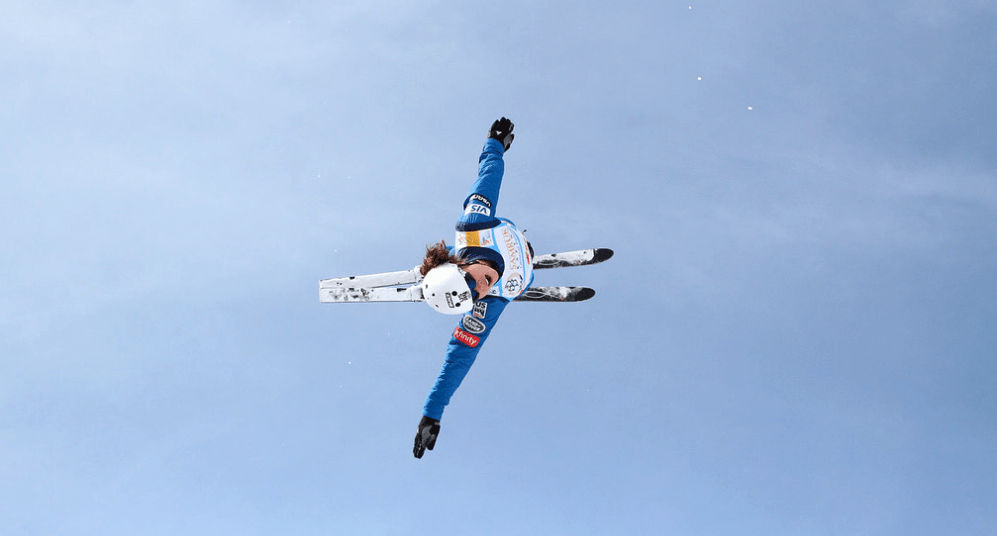 Photo courtesy of US Ski and Snowboard

Chances are various in-air tricks come to mind. You see this event every four years during the Olympics. Insanely brave skiers dart down a sheer slope and hit a jump launching them 60 feet into the air.

Once airborne come the flips, twists, and spins at unimaginable speeds. Even more mind-blowing is, after they’ve kissed the sky, each ski needs to find terra firma on an equally steep slope.

All this happens while coaches scream, fans go nuts, and judges judge. It’s exhilarating watching from home, but this apex is where Ashley lives and thrives.

Aerial competition has taken Ashley around the globe. From training peaks in Park City, Utah to the hidden canyons of Kazakhstan, Ashley has challenged the world’s best in aerials. Her quest for the perfect jump has tested her mettle—on and off the slopes—and she keeps coming back for more.

In a span of twelve years, Ashley went from rookie skier in Vancouver to veteran status in PyeongChang. And surprisingly, her path to the Olympics began in a gymnastics studio in Virginia, where she tumbled and flipped with the best of them. Always enthralled with the Olympics, Ashley thought she might have a go as a gymnast, but her mom had other ideas.

“She said I was getting too tall!” Ashley laughed. “Mom said I should combine my love of gymnastics and skiing and try aerials.” 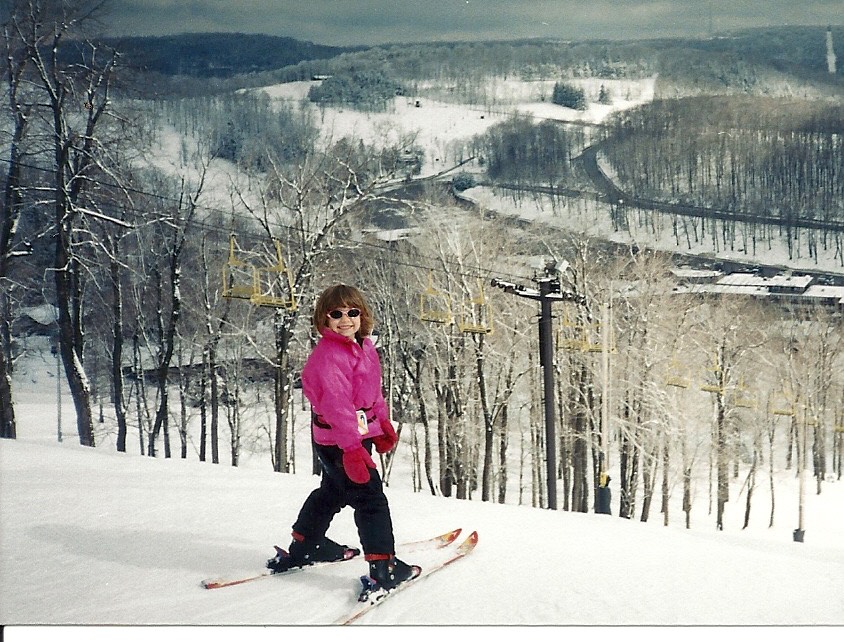 Soon, Ashley and her father headed to a ski camp in Whistler, Canada. After a brief stint on moguls, her coach introduced her to aerials. It was a perfect fit. Ashley quickly nailed backflips into the training pool. Her confidence grew. A natural swagger manifested with every training session. From a country mile, you could see she was a different type of skier—one with a burning passion for competition backed by a formidable talent.

The next two years of Ashley’s life set everything in motion. At 14, she moved away from home and enrolled in online school. Her life became laser-focused on excelling on the slopes. Most at this age are consumed with surviving junior high or getting their driver’s license, but Ashley was busy eyeballing her spot on the Olympic team.

“My parents’ support has been incredible,” she says. “They pushed and encouraged me. You need this kind of love to compete at this, or any, level.”

She hates the cold. Not many skiers will admit this, but Ashley prefers sandy, warm beaches. Scroll through her Instagram and you quickly discover she thrives when the sun is out. But skiing is her craft, and she’s committed to taking it to the next level.

Her first two trips to the Olympics were incredible learning experiences. Ashley competed with the best and proved she belonged at the highest level. Elite fellow athletes pushed her to train harder and reach new heights. Her relentless dedication led to winning gold at the 2016 FIS World Cup in Minsk.

“It was a huge accomplishment to win the overall title,” Ashley says. “Finally having everything come together was a career marker.” 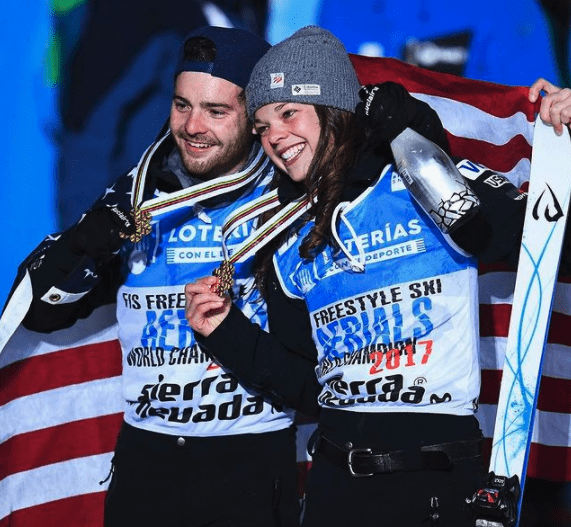 Gold is good, but breaking barriers is better. And what set Ashley apart was landing the biggest jump in ariels: the Daddy. A quadruple-twisting triple back flip, she’s the first female aerialist to ever land this mind-boggling trick.

The skill to pull this trick off in competition is awe-inspiring. Ashley reaches speeds of 45 miles per hour as she hits the 14-foot jump. In the course of three seconds, she does a backflip with a full 260-degree spin, a second backflip with two full spins, and then finishes with a final backflip and the last full spin. While in the air, she scans for her landing spot and sets down with her hands in the air.

“[As the first woman] I had to train twice as hard as the men,” Ashley says. “It’s an incredibly dangerous jump. Frankly, since I’ve landed it, it shouldn’t be called the Daddy anymore because I’ve crushed it.”

Fighting Through the Pain

PyeongChang was host to the 2018 Winter Games, and Ashley earned her third consecutive spot on the team. With a decade of training, she easily transitioned from rookie to seasoned veteran. And yet, Korea was a galvanizing experience for Ashley—for all the wrong reasons—testing her indominable strength and resilience. 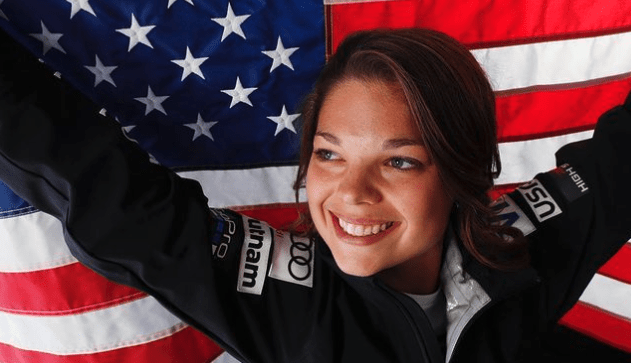 The day before competition Ashley was in her zone. She’s notorious for slipping into a rhythmic movement before each jump and her confidence was brimming. Bouncing back and forth puts her into the right flow. She asked her coach for one more training jump. He wanted her to save her best jump for tomorrow’s competition. Ashley pushed back.

“The Olympics are a crazy time,” she says. “I was perfectly ready. I was doing my best tricks and landing them well—I was on fire.”

Her coach relented and Ashley got set for a final jump. At the top of the slope, she wanted to go 70 kilometers per hour (KPH) down the hill. Ashley went 74. You’d think more speed is good, but controlled chaos is the name of the game for aerial jumpers. That extra 4 KPH coupled with a chance gust of air at the apex of her jump changed her Olympic trajectory.

Ashley landed on her back.

Having separated the acromioclavicular (AC) joint in her shoulder, the pain was incredible. But Ashley was determined to fight on. It was the Olympics after all, and she’d worked too hard to not compete. In a moment when most would call it quits, she taped her shoulder, took a pain killer, and got to work. The result was not what she wanted, but she never gave up. Ashley mustered her all and left Korea hungry for more.

“Never give up,” she says. “You keep competing. You learn from your experiences and bring that confidence with you everywhere you go.”

Ashley possesses a restless spirit. Training for World Championships and Olympics would be enough for most people, but Ashley always strives for more. She’s working on her second master’s degree, surfs in her free time, and scuba dives. And for one who beats back butterflies while competing in a cutthroat sport, she’s finally found something that makes her nervous.

“I started playing guitar and performing,” she admits. 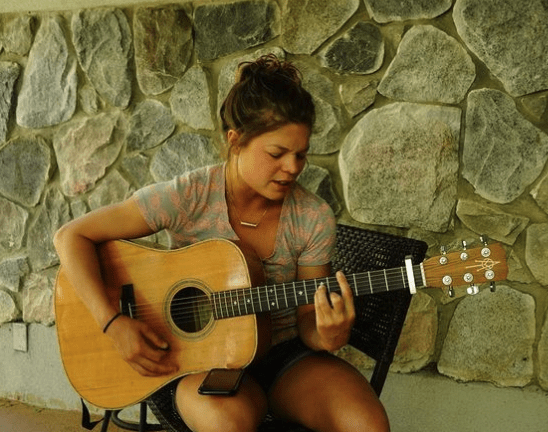 “Playing in front of people this weekend is scarier than triple backflips!” – Ashley Caldwell. Photo courtesy of Instagram.

Each person has obstacles in their way, but Ashley believes you have the inner ability to accomplish your dreams. It takes work, dedication, and commitment. From an early age Ashley’s followed her passion, stayed focused, and never let her curiosity wane. This drive makes her not only a threat on the slopes but an inspiration for anyone looking to reach new heights.

The featured athlete is either an Associate or dedicated product user who has received complimentary USANA products and/or compensation for their partnership.