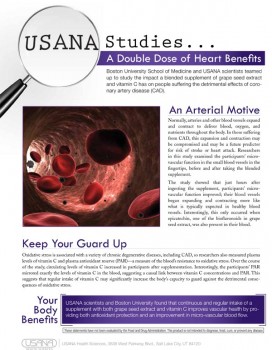 USANA scientists recently conducted a study in conjunction with a research team at the Boston University School of Medicine. The study showed that grape-seed extract and vitamin C may be beneficial for people who already have a form of cardiovascular disease called coronary artery disease (CAD).

Here’s a little bit of background: Oxidative stress may impact the heart’s ability to effectively pump blood. Over time, this impaired function has been shown to be an important factor in the progression of CAD.

Grape-seed extract and vitamin C have been shown to significantly protect against oxidative stress, as well as to have positive effects on blood flow. The USANA/BU team suspected that the powerful antioxidants could support healthy blood flow through supplementation of these two key nutrients together. 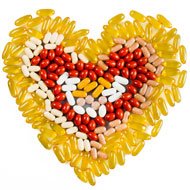 Researchers gave study participants, who were already diagnosed with CAD, either a placebo or 450 mg of grape-seed extract and 1500 mg of vitamin C. Blood samples were taken four hours after receiving the first dose, then again four weeks after taking the same dosage every day.

These results suggest (PDF) that grape-seed extract and vitamin C, working together, may help improve vascular function in people with CAD, even in tiny peripheral blood vessels. The results of this study were so impressive they were shared at an event sponsored by the American Heart Association.