Her smile, kindness and genuine demeanor put everyone at ease. Friends, old and new, flock to her side. I witnessed that first-hand when she arrived at the Los Angeles home of her best friend Kaley Cuoco, star of The Big Bang Theory, for a special Girl’s Night Out event. That night Amy discovered USANA. “I started with the BiOmega and was hooked!” Amy exclaims.

Now, after taking USANA’s Health Assessment & Advisor for a spin, she is receiving her very own customized MyHealthPak delivered to her door monthly.

“MyHealthPak is a combination of vitamins that were put together especially for what my body needs,” she explains. “I take them twice a day and have never felt better.”*

Her favorite USANA product, however, is one of USANA’s famous meal-replacement shakes.

“I LOVE the Vanilla Nutrimeal! I make smoothies all the time,” she says. “It’s also easy and fast, which is what I need when I’m on the go.”

One fun fact I learned about Amy: After every meal she makes a little hiccup-burp-squeaky noise. She’s not sure when it started but it’s pretty funny to hear her unique meal conclusion — even after Nutrimeal. It’s her compliment to the chef.

Amy’s simple rules for staying healthy include not only proper nutrition — with the help of USANA — but also regular exercise. She is an avid yogi.

“I found yoga almost 4 years ago and it has completely enriched my life, physically and mentally,” Amy says. “I feel stronger. Plus, I’m doing all these crazy things I never though I would ever do. I spend a lot of time upside down and on my hands and I love it.”

“Mixing it up is important,” she says. “A few years ago I hit a plateau because I always did the same thing. So when every day is different, I am more likely to get my rear in gear.”

Her perfect day, though, is spending time at the beach with her husband and two dogs. “It’s so fun to watch them run all over the place, getting wet and sandy. Sophie runs lightning fast is is hysterical to watch. Stanley on the other hand, becomes friendly with anyone who could possibly have food,” describes Amy.

Amy’s future is just as bright as her past. She’s involved in several projects right now and is actually creating her own show with one of the executive producers from the hit TV show 8 Simple Rules. She says it’s exciting to share her creation with others. 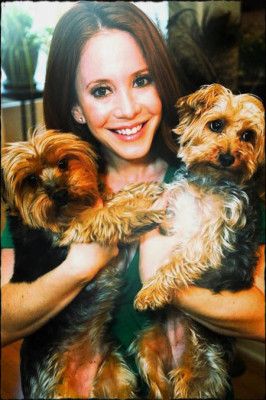 The young star came to Hollywood on a whim, not knowing a single soul. She began her entertainment career as a dancer, but quickly discovered her love of acting.

She landed a recurring role in So Little Time with Mary-Kate and Ashley Olsen. She also guest-starred on the drama series Judging Amy. After filming several movies, Amy landed the role of Kerry Hennessy in 8 Simple Rules with Kaley Cuoco, Katey Sagal, David Spade, James Garner and the late John Ritter.

“Working with John Ritter will forever be an extreme highlight in my career and my life,” she says. “I laughed every day to the point of tears. I think John for my smile lines… darn him.”

She adds, “I remember sitting on the couch with him while shooting the pilot and him saying how lucky we were to be working… John Ritter… saying that. I didn’t quite comprehend that then, but as I’ve gotten older I understand the importance of truly being grateful. I am grateful for work. I am grateful for the opportunity to act and do what I am so passionate about. John taught me humility. I am extremely blessed to have known him.”

Amy says life is about gratitude, even when there is a lot to juggle.

“Juggling is an art. I’m not sure I’ve perfected it just yet. I honestly have to take it day by day. My agent called the other night at 9 p.m. with a last-minute audition for 9 a.m. the next day,” she says. “That’s how much I have to be on my toes. You never know what’s going to happen day to day. I have to stay open and ready for what’s ahead. My life could change drastically tomorrow — and I’ll take it.”

That’s great advice for us all. Stay open to all possibilities down the line and be ready to juggle whatever lies ahead.