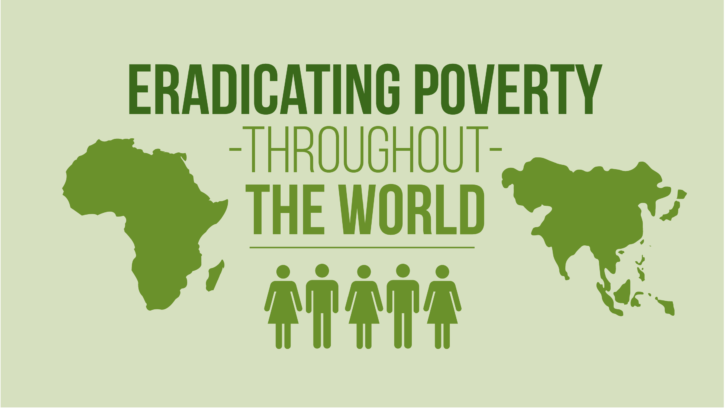 It Started With a Priest in France

Thirty years ago, Father Joseph Wresinski stood before 100,000 people in the Trocadero Human Rights Plaza in Paris.The audience was a mix of every socioeconomic backgrounds and every continent on the planet. Since being ordained over 40 years ago, the old priest had a singular mission: to eradicate poverty in every corner of the world.

As the assembled crowd waited for Wresinski to unveil the commemorative stone, they couldn’t help but think the impact this man had made in identifying and treating poverty throughout the world.On this marble stone, read his lifelong call to action: 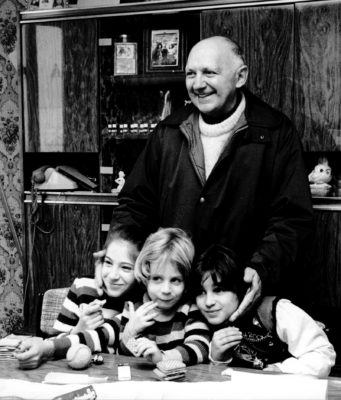 “Wherever men and women are condemned to live in extreme poverty, human rights are violated. To come together to ensure that these rights be respected is our solemn duty.”

Five years later, the General Assembly of the United Nations passed the “International Day for the Eradication of Poverty.” In several countries, on the 17th of each month, people gather for a short commemoration in honor of the people who suffer from extreme poverty, and to renew their commitment to help them.

For the 25th anniversary of this event, the United Nations is recommitting its efforts to eradicate poverty and eliminate and alleviate the dire consequences of living in it with “Answering the Call of October 17 to End Poverty: A Path Towards Peaceful and Inclusive Societies.” This year’s commemoration is a reminder of the importance of the values of dignity, solidarity, and speaking for those without voice to end poverty everywhere.

Take a moment to consider the importance of this important milestone in the effort to eradicate poverty around the globe.

What Does it Mean to Live in Poverty?

Chances are if you’re reading this you do not live in poverty.

You probably have a home, food in both a refrigerator and pantry, and a closet with clothes and shoes. Even if you don’t have health insurance, you probably live close to a hospital. It’s safe to say that you have had some education and you have access to the clean drinking water. And even if you live in a dangerous part of town, you’ll have police and firemen protecting you. And you definitely have access to the internet.

For those living without the bare necessities of life, poverty is a killer

Over a billion people live in poverty. That’s one in seven human beings. They’re found throughout the world but primarily in places like sub-Sahara Africa, Southeast Asia, and the Caribbean. Over half of China and India’s population live below the poverty level.

But the poverty narrative is more complicated than not having money. Between despotic governments, global change, lapses in technology, and war/conflict, people have fallen into cycles of poverty that are nearly impossible to escape. It’s a horrific situation.

But what can you do to help eradicate poverty for those that do?

Defining Poverty: The Difference Between Absolute and Relative 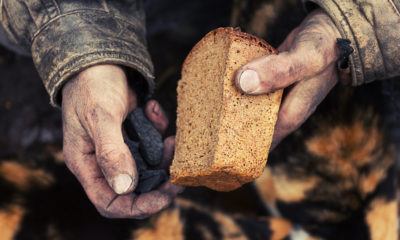 To first address poverty, you need to identify it. According to the World Bank, poverty is broken into two specific classifications: absolute and relative poverty.

Absolute poverty is the complete lack of means necessary to meet basic personal needs such as food, clothing, safe drinking water, sanitation facilities, shelter, education, and information. Absolute poverty is the situation where those affected are unable to do anything to alleviate their suffering. They’re dependent upon outside resources to assist them. People suffering from absolute poverty are unable to change their situation without the assistance of outside forces: humanitarian efforts, military protection, or civil reform.

Relative poverty is when a person lives in a given country and doesn’t enjoy a certain minimum level of “living standards” as compared to the rest of the population of the country. Therefore, the threshold at which relative poverty is defined varies from country to country or from one society to another.

Relative poverty is much more nuanced. For example, the United States and Canada are not poverty nations. However, they have citizens that live below the poverty threshold. To calculate the poverty threshold, economists multiply the Consumer Price Index (CPI) by three for the minimum food diet in 1963 and then adjust the number for inflation. It’s a complicated algorithm that determines if people have enough money to eat. In 2015, the most recent year for which data is available, the poverty threshold for a family of four was US $24,563.

You’re probably calculating in your head if you could live on that daily amount. But remember, you need to house, clothe, and feed yourself. This would include transportation, paying for medical care, a cell phone, and any other daily items. It’s doable, but what if you get a parking ticket? Or get sick? Unexpected bills can have serious consequences.

Seeing a movie is out of the question. Buying a magazine or downloading a song could ruin your budget. Gym memberships or vacations are out of reach. Poverty removes you from society and limits your ability to improve your situation simply because all of your energy is dedicated to survival.

Why Does Poverty Persist?

Those born into poverty are statistically more likely to remain in poverty. There is a strong correlation between those living in relative poverty to share the economic status of their parents. The track for those not living in poverty to reach middle- or upper-class income levels is easier than those below the poverty threshold to cross over it. This is because institutional assistance for those in poverty has less of an impact than those measures that assist individuals not living in poverty. 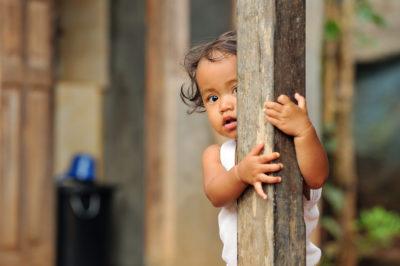 For example, the margin of gain from tax loopholes are larger than the quantifiable social services provided to those living in poverty. In the United States, being able to write off portions of your home mortgage outweighs the benefits of food stamps. Because legislation tends to favor the economic group that writes the laws, poverty advocates often petition for life-saving measures (food, shelter, and medical) rather than economic incentives (micro-loans or vocational training).

But the practical impacts are easier to measure. Let’s examine toilet paper. Most people purchase toilet paper in bulk. A 30-pack from a big box store runs around US $23. That’s about 76 cents a roll. But if you can’t afford buying in bulk, you could be spending over a $1 a roll. It costs more to live in poverty when you consider that the price breaks are not readily available. Over the course of a lifetime, people living under the poverty threshold will overspend on vital goods and services.

Instead of being able to purchase a good pair of shoes that will last, those in poverty buy cheap, disposable shoes. Instead of getting a reliable car, even the working poor settle for a vehicle that might require more repairs, get worst gas mileage, and lacks safety features.

The list goes on but the results are the same. Those born into poverty remain there because they don’t know or are unable to break the cycle of poverty.

Conflict is a Major Contributor to Poverty

The cycle of poverty is a set of factors or events by which poverty, once started, is likely to continue unless there is outside intervention. In other words, we need to eradicate poverty. Essentially, those living in poverty have either limited or no resources to which they may bank upon. Low salaries, disease, a bankruptcy, or any other countless misfortunes can place generations into poverty and make it very difficult to escape.

This is especially true in conflict regions. Where war exists, poverty traditionally follows.

For example, let’s examine the aftermath of the genocide in Rwanda during the mid-1990s. Even before the Rwanda Civil War, this African landlocked nation was one of the poorest in the world. Lacking natural resources, the vast majority of the population worked in agriculture, with most people growing only sufficient food for household consumption.

The results of the nearly four-year conflict were devastating. Over half-a-million people were killed with nearly 800,000 people displaced. The majority of those killed were men, leaving close to 54 percent of the households with women in charge to run the farms. In the aftermath, there was little working infrastructure, lack of clean water for drinking, and nearly no industrial complex. Over 67.4 percent of the population lived in poverty with over 80 percent living in rural areas. The refugee camps became breeding grounds for communicable diseases like malaria and 24 percent of the households were affected by HIV/AIDS.

The biggest victims in all of this are children. In Rwanda, malnutrition and disease contribute to a high infant mortality rates. With over 56 infant deaths per 1,000, this is above the African nation average of 38. 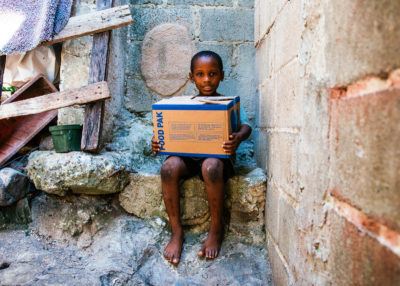 With over 56 infant deaths per 1,000, this is above the African nation average of 38. In context, the average infant mortality rate for European nations is 5.6. In addition to not having adequate resources, Rwandan children face violence on wide spread basis, have access to schooling but rarely attend (less than 6 percent of all children finish high school), and are forced to remain in rural areas farming for less than US $0.36 a day.

The cycle continues because outside interventions are either unsuccessful or unavailable. Multiply the tragedy in Rwanda by the 30 conflict regions around the world (Afghanistan, Syria, Ukraine, and Sudan) and it quickly becomes apparent that the curse of living in poverty is less by chance but by clearly demarcated circumstances. Let’s eradicate poverty together!

What Can You do to Help Eradicate Poverty?

Poverty is a complicated, socioeconomic problem. It’s more than not just having money or food or a place to live; it’s composed of the relationships individuals have with their family, community, church, government, and global community. For those living in poverty, they tend to focus their energies into escaping their dire condition. For those not living in poverty and want to help, they tend to focus on small to big issues.

And no matter which side of the poverty line you live, trying to address this problem can be overwhelming. But you can still help eradicate poverty—even if it’s in a small way.

It starts with awareness. Talk with friends and family about poverty. Share links on social media. All solutions start with conversation. Even though discussing poverty seems trivial, good can come from helping people identify the problem. And don’t get discouraged. While over a billion people live in poverty, the overall rate of poverty has slowed down. In 1990, the poverty rate in the world was 43.1 percent of the population—today, it’s 20.6 percent. 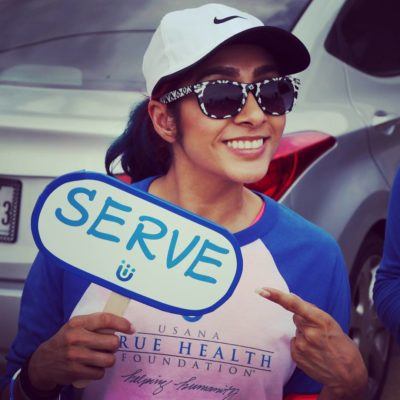 The next step is to volunteer. There are countless organizations around the world addressing the needs of those in poverty. They range from fighting hunger to offering key medical treatments. Visit the Borgen Project’s website and see what amazing work groups are doing around the world. Traveling overseas is difficult for most people, so find local charities in your community where you can volunteer. By making a difference at home, you can see the results of helping those in need. Hosting food drives, donating used clothes to shelters, or contacting your elected officials can make a big difference to eradicate poverty.

Last, donate money to worthy charities. The USANA True Health Foundation (THF) is a perfect organization to help those in need. Because USANA covers all administrative costs to the THF, 100 percent of all donations are used to feed people around the globe. For every US $1 donated, the THF can provide four meals. A $25 donation equals 100 meals. This is substantial. This makes a real difference. And this is something you can do. Visit the donation page at the THF and make your donation today. 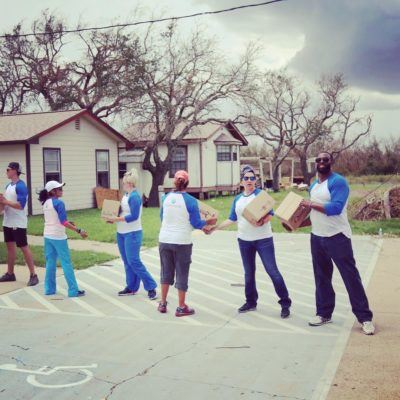 For those living in poverty, it might seem hopeless. For those who don’t suffer, take a moment to consider the steps you can take to help to eradicate poverty throughout the world. Spread awareness, volunteer, and donate to worthy causes.