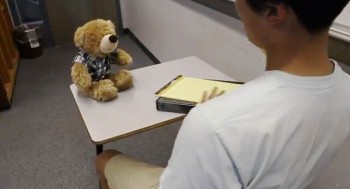 Talent runs deep in USANA, and we at What’s Up, USANA? are always eager to showcase the ingenuity and creativity of our Associates.

I received a note from Duke Ngo the other day. If you’re a fan of the Dancing Ed videos — and who’s not? — Duke is the producer behind the camera.

Well, he just finished a short film based on a true story. If you look closely you might catch glimpse of a certain energy drink appearing in certain scenes.

Here’s a little background on Zoots the Bear, courtesy of Duke:

“The video was inspired by a close friend, Raymond Philip Napuli, who wrote and composed the entire musical piece that you hear during the video. Myself and Silver Director Brian Lee decided to pick up the project and create a short film music video based on events that happened to our friend throughout college.

Fueled by cases of Rev3, support from our USANA friends and family, and the hungry ambition for video production, Brian’s production company KoyTurtle and myself got together and over a span of 6 months planned, filmed, and edited the entire video. We visited famous locations such as Stanford University, the City of San Francisco, and the University of Pacific.

And we even had a very special guest appearance by our beloved Rev3.”

Awesome! Congratulations to everyone involved. Here’s the video. Please take a look and leave your comments for the filmmakers below.

In addition to Zoots and the Dancing Ed franchise, Duke also helped produce videos submitted for the recent Rev3® Energy Viral Video Contest, including Aaron Dinh’s All the Time, Any Time, and Bill Nguyen’s Rev3 — Lock It Up.