The USANA Rev3 Energy® Video Contest needed an awesome awards presentation to match all the amazing entries we received. And since it was a Rev3 thing, we knew we couldn’t lean on the same dusty awards show staples.

There would be no red carpet, no pretty people in pretty clothes, no bloated production numbers, no weird cutaways to the losers trying to put on a good face, and we’d keep our runtime well under 12 hours.

Our first idea involved a lot of fire, the possibility of dancing robots, and definitely a Rev3 Energy drink fire hose. For safety and budgetary reasons we decided to just go with this blog. (But trust me, it would have been epic.)

Before we get to the winners, here’s a little bit of background on the contest: on the first day of December 2011, we decreed that a contest be held. It was to be a contest of wit and wizardry — the two components most necessary for viral video success — and massive amounts of cleaner, smarter, stronger energy. 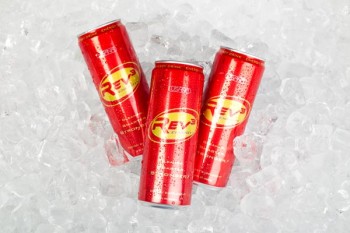 Thirty-two brave souls took up the challenge to create a Rev3 viral video no more than 60 seconds in length, thus giving them the chance to win a year’s supply of Rev3. These artistic creations were judged by a team of USANA employees on four criteria, each weighted equally:

After much deliberation and discussion, a winner emerged.

So, without further delay, we’d like to announce the winner of the Rev3 Viral Video Contest.

Congratulations to Michael Dewayne Carter, Jr.! His video “Are You Reved Up?” won him a 28-case supply of delicious Rev3 — yep, we added four more cases — and Michael’s video will be featured on DrinkRev3.com!

Since there were so many great entries, we decided to add prizes for the first and second runners-up.

Tom’s “Rev3 Million Dollar Can” and Mark’s “Rev3 Rap” won each of them a nifty Rev3 cooler and 12 cans of no-crash energy to fill it with.

A big thanks to everyone who took the time and the energy to send in a submission. If you’d like others to see your entry, please feel free to share the link in the comments (we’ll post the above three videos — and possibly others, pending approval — on USANA’s YouTube Channel).

And keep the  Rev3 flowing. Cheers!