When USANA announced the opening of the Colombia market, USANA Emerald Directors Melanie and Brett Ethridge were excited to hear the company was once again growing.

But at that point, they had no idea how drastically that announcement would impact their lives.

Melanie had always hoped to live in a foreign country, but she and Brett didn’t necessarily think it was in their future. “It had always been a dream of mine to live in South America,” Melanie shares. “But I thought I had missed my opportunity in life to actually do it.” As it turned out, life had other plans for the couple.

As USANA continued forward with opening Colombia, Melanie and Brett couldn’t help but feel like they were also being directed toward the country.

“These doors started opening for us, and we knew moving was something we were supposed to do.”

“We loved our life in Denver and it was hard to give that up, and we knew that we were leaving something really great for something unknown,” they explained. Still, within three months, the couple — along with their dog, Esther — were on their way. 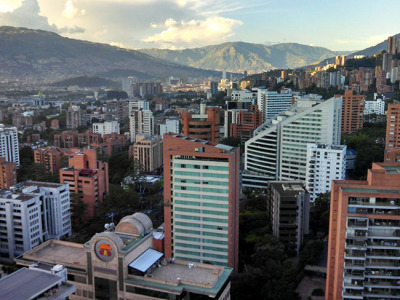 While the couple has found great professional success during the last 17 months, they have also been rewarded with rich cultural experiences — adventures they can’t begin to put a price on. From learning Spanish to dancing the salsa and merengue, they have truly immersed themselves in the culture.

Selecting a favorite moment up to this point is nearly impossible for the Ethridges, but there have been a number of highlights.

Last December, the couple was able to participate in La Novena, a Christmas tradition where people gather for nine days leading into Christmas to pray and sing together.

“We visited a different home every night for nine days, and there was always wonderful food, music and fun involved,” they recall. 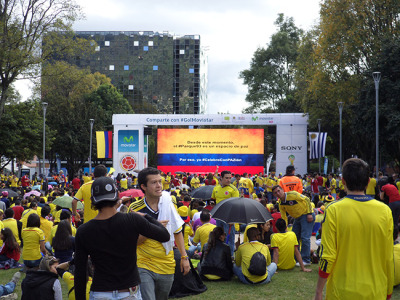 The FIFA World Cup™ also helped create many lasting memories for the couple.

Melanie says, “As I was entering my apartment building one day, the doorman had a huge smile on his face and scooped me up in a big hug because Colombia had just tied a soccer game guaranteeing their spot in the World Cup. I had never even seen this doorman smile before, and here he was with a huge grin on his face!

“In addition, the entire city was dressed in yellow, and cars would drive up and down the road honking their horns and flying Colombia flags out their windows. The whole experience was incredible!”

The couple never intended to stay in just one location in Colombia, and the last year-and-a-half provided them with three different cities to call home: Bogotá, Cartagena, and Medellin. Each location has resulted in success and memories.

“We are currently living in Medellin and we really love it,” they say. “Plus, the sunset view from our penthouse apartment is beyond breathtaking here!”

Developing and growing a strong USANA business has given Melanie and Brett more than they ever imagined, and they are quick to say this move to Colombia has changed their lives. They are truly grateful for the experiences they’ve had and for the relationships they have developed with other Associates and the USANA Colombia corporate office.

“We are very different people than we were when we moved here,” they say. “We think part of that comes from the charge you get in life when everything is new every day.”

Looking back, Melanie and Brett are also grateful they never gave up on Melanie’s dream.

“I thought I had missed my chance to live in South America, but being here proves if you are willing to work for it, you can make any of your dreams a reality.”