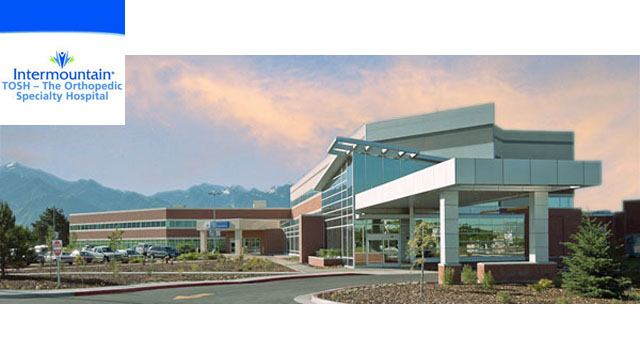 Leave the USANA Home Office headed east toward the towering Wasatch Mountains and any one of three routes will put you at The Orthopedic Specialty Hospital (TOSH) in less than 20 minutes. There are 12 measly miles of road between the corporate headquarters and the medical campus — road that represents a connection deepened by, but not built upon, proximity.

Collaboration is the vocabulary word Tyler Barker, Ph.D., a physiologist and clinical researcher at TOSH, would use to describe the research relationship with his neighbors to the west. It’s a collaboration manifested in shared interest, workload, and desire to be better through a two-heads-are-better-than-one philosophy.

“USANA isn’t just supporting the research, they’re doing it,” Barker said. “It would not be possible without USANA. Sometimes I feel bad because I’m always bugging Brian.”

He’s talking about Brian Dixon, Ph.D., USANA’s director of product innovation, and one of the members of USANA’s Research and Development team Barker works with most closely. Dixon and Barker should be familiar with each other. Both logged time at the Linus Pauling Institute (LPI). They kept in touch after their time in Corvallis, Oregon, and have fostered the collaborative spirit both point to as a strength of the partnership, which officially started in 2009.

But Barker’s relationship with USANA actually goes back further. As part of a research partnership with LPI, USANA funded Barker’s dissertation.

A Recipe for the Perfect Collaboration

Although the research partnership between USANA and TOSH is fairly new, the collaborative nature of the relationship is already bearing fruit.

None of it would be possible without the unique expertise and resources Barker and TOSH bring to the table. And since TOSH is a world-class facility on the forefront of orthopedics, their contribution is by no means paltry. There’s the medical-campus setting with physicians, surgery, physical therapy, athletic training, and research under one roof.

Then there’s the constant stream of patients that make up a large, varied population — everything from kids getting ready for their first football practice to osteoarthritis sufferers in need of a total knee replacement. Everything adds up to the perfect setting for human clinical research about nutrition and orthopedics, and the perfect partner for collaboration.

“Tyler and his team bring a specific skill set and expertise to a problem, and our team at USANA brings another skill set. It works well,” Dixon said. “You have a physiologist working with a molecular biologist, and Tyler can do things that we can’t do. We can do things that they can’t do. Those are the perfect collaborations.”

Like with anything, the research collaborations between USANA and TOSH start with a good idea. Conversations between Barker and USANA’s team produce ideas that could work for both parties. USANA and TOSH then work to turn those ideas into mutually beneficial research. That means designing a study, manufacturing the supplements, working on blinding and randomization — important steps to assure scientifically valid results — recruiting subjects, and collecting and analyzing the data. So the collaboration runs from conception to publication or presentation of the findings.

“I feel like it’s more on an academic level, as opposed to something marketing-driven,” Barker said of the relationship between the two groups.

The relationship between USANA and TOSH materializes in the four human clinical studies currently underway — all of which explore the convergence of orthopedics and nutrition.

The first study examines whether low vitamin D status impairs recovery from muscle damage, and whether supplementing increases vitamin D levels and improves recovery. Data is only collected in the four winter months, but TOSH has finished subject recruitment and enrollment. Barker is ready to start data analysis, and he’s excited about what he’s seen so far. There have already been presentations at international scientific conferences, and the first manuscript from the study is in print now.

Barker was also able to leverage USANA’s resources to secure $40,000 in additional grant money for the study, getting even more research out of the company’s investment.

Knees are the focus of two other USANA-TOSH collaborations. One study builds on Barker’s dissertation, investigating the role vitamins E and C play in strength recovery following ACL injury and surgery, and whether multivitamin/multi-mineral supplements have an influence on strength recovery, as well. The ACL, or anterior cruciate ligament, is one of the four major ligaments of the knee. The study is approaching 50-percent subject recruitment, and Barker expects to do an interim analysis soon. The other knee study explores whether multivitamin/multi-mineral supplements influence strength recovery, inflammation, and wound healing following a total knee replacement — a procedure that is increasing in frequency, especially in women. Barker said they are halfway to their goal of 30 subjects.

Data collection is continuing on both knee studies, but is just underway in the final USANA-TOSH collaboration — a vitamin D-osteoarthritis study. There are already 20 subjects, and five have finished their 12 weeks of supplementation — either a custom pack of vitamin D, fish oil, and joint-health supplements, or placebos.

It’s a big study that involves several end points and outcome measures. But it’s important because, according to the Centers for Disease Control and Prevention, osteoarthritis affects an estimated 26.9 million adults in the United States, and is currently the leading cause of disability. This study is so important USANA has committed $250,000, plus the cost of supplements and other sample analysis.

There are other things Barker has going on as well, like a case study exploring vitamin D status in the first subject to enroll in the total knee study. “We’re funding four studies and we expect four conclusions to come out of it,” Dixon said. “But Tyler goes above and beyond. He is consistently reanalyzing the samples he and his team have already collected as new research comes out to verify findings or even make new ones. So we get a lot of bang for our buck.”

And the fact that these studies are happening in humans, in a medical setting, makes the research even more valuable.

“Subjects are coming here to get better — they have a bum knee or a bum hip or something — we want to make their lives better,” Barker said. “But at the same time, let’s do a little research to find out what’s going on and see if we can improve that.”

When USANA evaluates which research to support, the phrase “cutting edge” is always part of the conversation. Working with researchers pushing the frontier of science is paramount, and the research with TOSH definitely fits USANA’s cutting-edge mantra. Crossover between orthopedics and nutritional science has been infrequent, but it’s quickly becoming an emerging area of interest — one where TOSH and USANA are already making advances.

“You can probably count all the studies that have examined vitamin D and inflammation in orthopedics on one hand,” Barker said.

Most of the research in orthopedics involves surgery, physical therapy, and biomechanics. There have been a few studies with vitamin C, iron, and folate, but most have been observational, not experimental, in nature. USANA and TOSH are trying to do both and, in the process, produce truly groundbreaking work.

And by no means is that work done. In fact, Barker and Dixon think the future looks bright. USANA funding has already allowed Barker to hire two research assistants to help shoulder the burden of running numerous clinical studies at the same time. Barker usually has about five studies on the backburner, too, and there are indications that some of those might be of interest to USANA.

“We’ve talked about a couple of possible studies, and there’s some additional funding that’s going to be coming TOSH’s way,” Dixon said. “Who knows where nutritional science and patient care is going to go in the future? But we’ll obviously be on that cutting edge.”

Barker would like to get to a point where USANA and TOSH are doing larger phase two and three clinical studies. The specifics aren’t clear, but what is — judging by the glowing way he talks about the collaboration he’s had with USANA — is Barker’s excitement about what the future holds for the partnership.

“USANA has quality supplements and quality people,” Barker said. “And then, with all the subjects and patients that walk through the doors here, basically, what we can do is endless. There are always questions and hypotheses.”

Editor’s Note: A version of this story originally appeared on USANAtoday.com. It’s the third article in an in-depth series about USANA’s research partnerships.