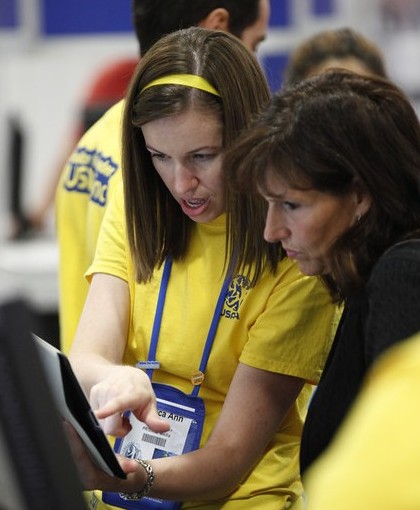 I began working on the social media team at USANA’s corporate office in November 2011.  It was the week of Thanksgiving, but even then, people were already talking about Convention 2012. I may have been a newbie, but I knew Convention was something special.

Leading up to Convention, I heard plenty of stories, saw thousands of pictures and watched numerous videos. I thought I understood. I thought I was prepared.

The truth is, nothing can prepare you for your first Convention.

Until you’re there, actually experiencing it, you don’t understand the scope or scale — and it’s amazing! There’s so much to take in and so many people to meet, you need all day to accomplish everything.

There were a few experiences in particular that stood out to me.

This is My First Year at Convention, and I’m Blown Away.

The social media booth is a great place to be during Convention. It’s in the store, so there are tons of people around, and there’s an electric buzz in the air that’s contagious.

We get the best of all worlds at the booth with newbies setting up accounts, established users asking questions and so-called “tweeps” stopping by to chat or take part in T-shirt giveaways.

Some of my favorite conversations came when talking with an Associate who was also experiencing Convention for the first time. There’s something about a shared experience that breaks down barriers. And each time I had a conversation about being a first-timer, I felt like I had made a new friend. (A special shout-out to the guys from NEX who chatted with me on Thursday. You guys are awesome!)

I Tried My First Rev3. (Thank You, Dave Baker)

Somewhere there’s video of me drinking it. Downed it in one shot. You’ll just have to take my word for it. 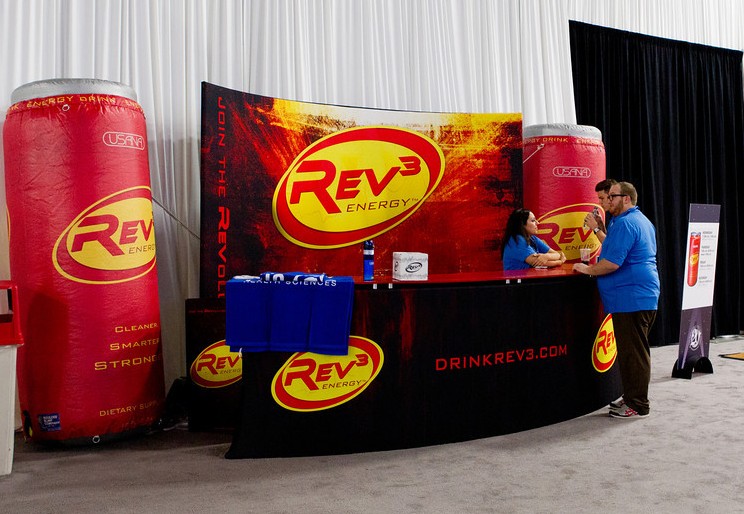 A New Look to Take Us Into the Next 20 Years.

Heading into Convention we knew the corporate brand change would be a big deal. Months of planning took place before unveiling it to the world. For the social media department the announcement meant real-time messaging on Facebook, Twitter and What’s Up, USANA? All of our other social sites — LinkedIn, YouTube, Pinterest, etc. — needed updating. We knew the timing had to be perfect.

It was jaw-dropping to watch USANA’s new logo, brand promise (everything we do will help you love life and live it) and new tagline (your health. your life. your way.) light up social media. #USANA12 even hit No. 2 on the Twitter trend list for Salt Lake City! Your response on Facebook was equally as impressive. Getting likes and shares from people all around the world really made USANA feel like a global company. 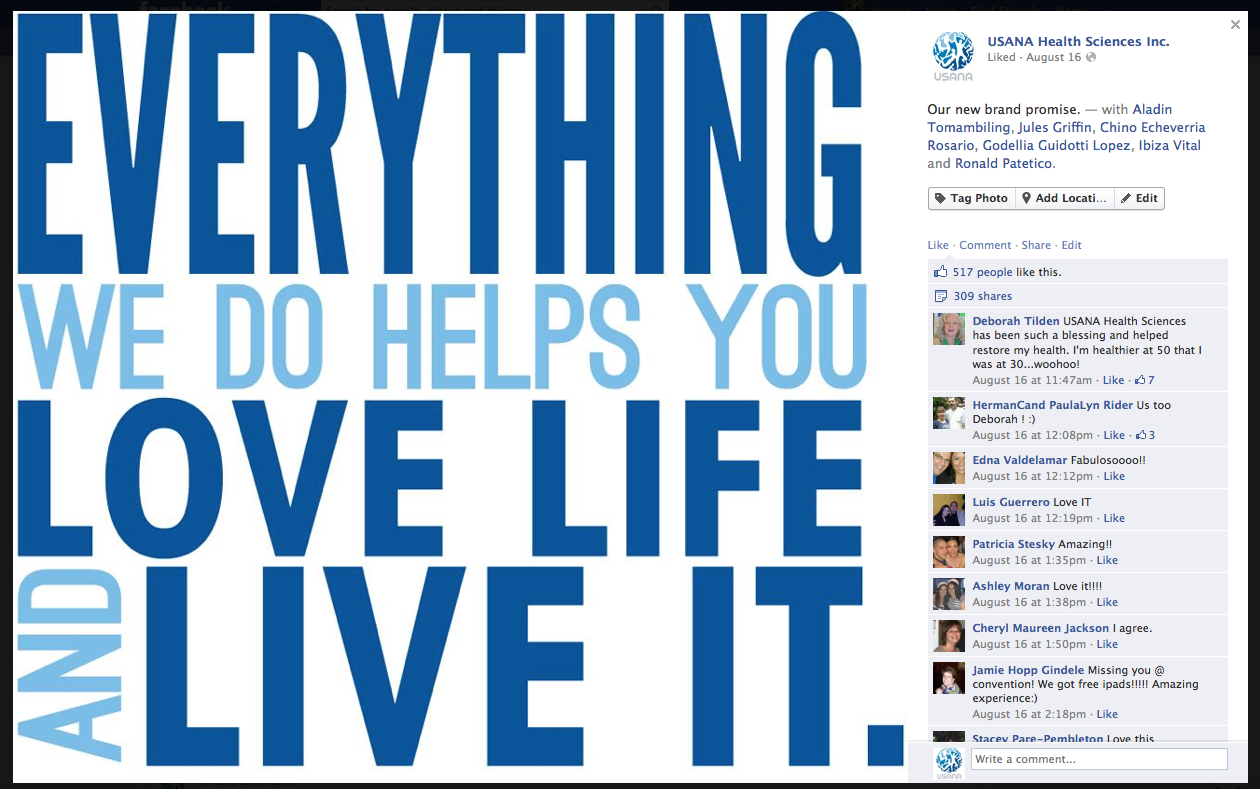 For me, the highlight of Convention 2012 was meeting Cathy from Canada. Cathy came to the social media booth on Saturday, and the first words out of her mouth were, “I’m Gen X, and I know nothing.”

Cathy had just come from one of the training sessions and was feeling overwhelmed at all the technology she “needed” to know. Just prior to Convention, Cathy purchased her first smartphone. Now, she was hearing she needed to be on Facebook and Twitter, and then, USANA gave her an iPad.

It was clear we needed a starting place.

Together, Cathy and I set up her first Facebook account. We went through the basics, with me showing her examples from my own account as to how things would look in the future. As we continued the process, I could feel Cathy’s confidence rising. I will never forget the way she squealed when she found a friend from Australia and her own son and daughter and sent them friend requests. Her smile lit up the room.

I doubt Cathy will use her Facebook account as a business tool right away. She may never use it that way. But that’s OK. Social media is about connecting with others online, and now she has the tools to do that. Personalization has never meant more to me than it did in that moment.

Thank you to everyone who stopped by the social media booth. You made me feel like a part of the USANA family. It was an honor to meet all of you, and I can’t wait until we meet again. 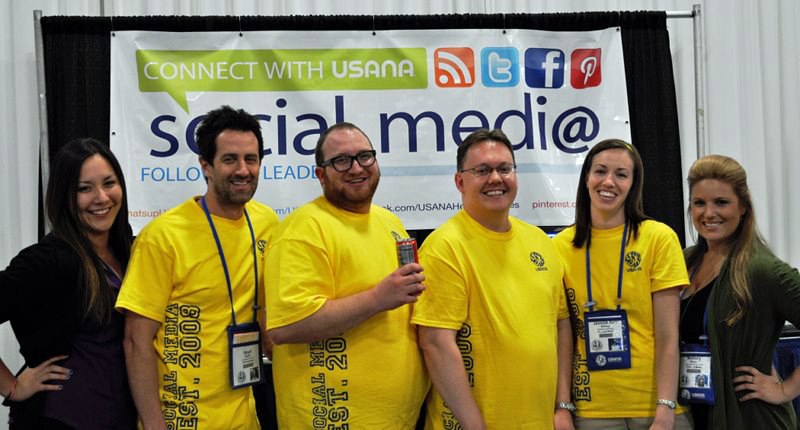 I get to work with some of the coolest people around! The #USANA12 social media team from left: Allie Henderson, Boyd Bastian, Dave Baker, Tim Haran, Jessica Whiting, Mallory Moger.

Connect with USANA’s Management Team
2012 Convention: The Stage is Set!
2012 Convention: It’s Bigger, Better Than Ever
Registration Open: USANA’s 20th Anniversary Convention Will Top Them All
Being Part of a Winning Team is Key to Success
Making Nutrition Personal with MyHealthPak™
Larry King Making Encore Visit to USANA Convention
3 Reasons You Must Attend Convention 2012
3 replies