Sara McMann knows a thing or two when it comes to perseverance. She’s lived through more tragedy than the average person should have to, but through it all has also accomplished more than most can say they’ve done in a lifetime. From dealing with loss, finding comfort in sport and becoming a mother, Sara has risen to the top despite having all odds stacked up against her.

Growing up Sara lived without heat and electricity at times and watched her parents struggle with substance abuse. While most 6-year-olds are preparing for first grade, she found her mother on the floor from an apparent overdose. Her mother survived, but it was one of the first tribulations Sara would have to digest.

In 1999 her older brother was murdered after a campus altercation, whose case wouldn’t be solved until 2004. A month before her brothers killer would be convicted, she lost her fiancé in a car accident as they began their road trip back east to start the next chapter of their lives together. Sara was the driver.

And while everyone processes tragedy differently, Sara has taken her adversities and used them to fuel her in other positive ways. 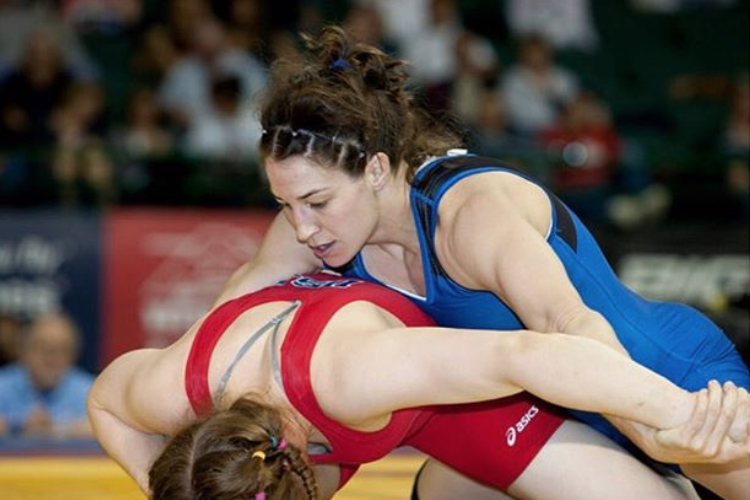 Sara McMann wrestling during the US Open in the early 2000’s.

Having turned to wrestling when she was 14, Sara would go on to become one of the best female wrestlers in the world and the face of USA Wrestling. During her career on the mat she won six national championship titles, three world championships medals, and became the first American woman to capture a silver medal in Olympic wrestling during the 2004 Games. All of this in the middle and aftermath of loss.

“I’ve always been able to understand that hardships are a natural part of life and that we must keep moving forward even in the midst of turmoil if you want to experience a great life,” she said. “Accomplishing one thing every day towards my ultimate goals, even if it’s just a baby step in that direction, has helped me become the person I am today.”

In 2010 Sara made the switch to mixed martial arts as a professional, extending her athleticism to a new skill set. Three years later she would make her debut in the UFC where she has since faced the likes of Ronda Rousey and current Bantamweight champion, Amanda Nunes. Ranked a top 10 fighter, she has her sights set on becoming the best MMA fighter, and hopes to one day lift a belt of her own in the cage.

“I have a really strong desire to be the best I can be in everything I do, and am motivated knowing that I can always improve and grow. I always feel like I haven’t arrived, but I’m searching for that moment.”

Outside of the ring, Sara is a mother to her 9-year-old daughter Bella and is expecting a baby boy later this winter with boyfriend Chad Bingham. After experiencing her unique upbringing, she hopes to instill in her children ways to overcome and process struggles of their own in a healthy way.

“I want my kids to know that obstacles are a completely normal part of life and that you just need to work through all problems to the best of your ability. You can let them get the best of you, or you can fight and rise above them.”

She finds peace in knowing that she can do that by applying the lessons learned through the space she’s always felt most at home as well.

“Sports have been a refuge and a second home and family to me when things turn upside down. My coaches, teammates, and goals have all helped me cope with passion and disappointment,” said Sara. “I think the best thing about being a mom in sport is that I can help my kids overcome life struggles through sport. I can be a great example to them in how I handle things—things not going your way, perceived unfairness, losses, injuries—everything that kind of happens through the course of life, is expressed through sport and it’s helped me to realize that you can push your mind and body in different ways, be selfless and still take care of all of the dreams and goals that you want to do in your life.” 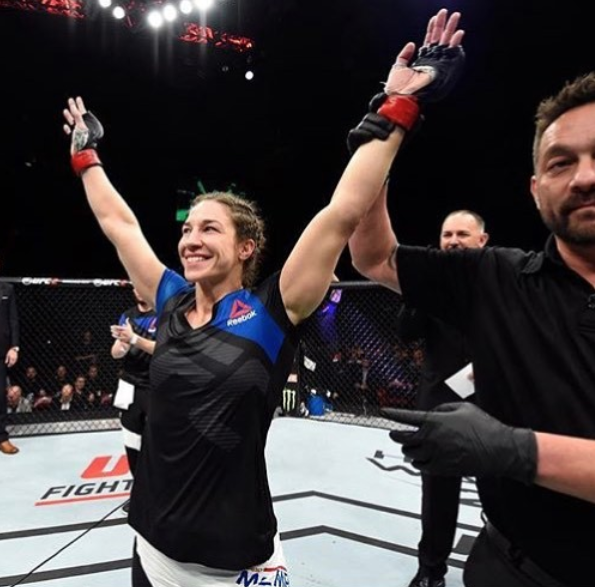 At nearly seven months pregnant, the 38-year-old continues to train with every intention of continuing her MMA career after her son is born. But while Sara plans to get back into the Octagon, she also wants to be prepared for when it’s time to take the wraps off.

“It isn’t easy working out at 31 weeks pregnant, but I know what I want right now and I know what kind of dedication it takes to get it. I have a really strong desire to be the best that I can be in everything I do in my personal and professional life,” Sara said.

“I haven’t set a definite path yet once I decide to stop fighting, but I’ve learned that while I can plan for things, other opportunities can always arise and I need to be flexible and malleable.”

“I have always enjoyed learning and being in the scholastic atmosphere and I have wanted to learn more about business from one of the top institutions and some of the brightest students,” she says.

Sara’s time at Harvard will be in addition to her bachelor of arts she holds in theatre and her masters degree in mental health counsel that she earned from Gardner-Webb University in honor of her late fiancé. She hopes to use her continued education and story to help others manage their own ups and downs.

“I realized that a lot of my happiness comes from helping others and while sharing my story doesn’t make my situation better, I’ve gotten through it and survived it. If doing that can actually help somebody else, it’s something I want to explore.”

Why she trusts USANA: I trust USANA because they offer tested products for athletes and guarantees that those athletes never have to worry about taking tainted supplements, which is really important in every sport.

Her favorite go-to USANA product: I love the entire Celavive® skincare line. The products feel amazing on my skin.

What she loves most about her sport: I’ve always had a love of combative sports and there is a degree of perfection sought when I’m in the cage. There’s a degree of grace with the movements of your body and there’s a beauty in being able to defend yourself. There’s a thrill inside the octagon that I can’t even describe.

Where you’ll find her when she’s not in the octagon: I live in California and love to explore and travel around to the states beautiful national parks.

Her advice when it comes to feeling your best: Take care of your body and it will significantly help your mind and emotions. Figure out want you need to do to heal and positively face your struggles, regardless of what others think.

Her five favorite artists: Jack Johnson, U2, Adele, The Beatles, The Doors.

Protect and Strengthen Your Eyes with Visionex
1 reply