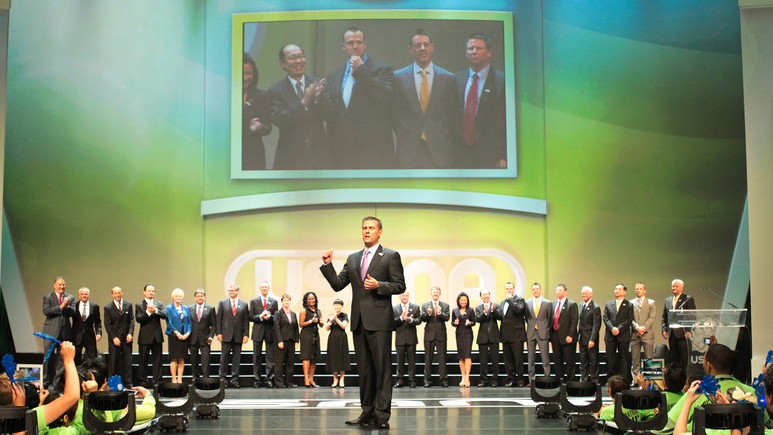 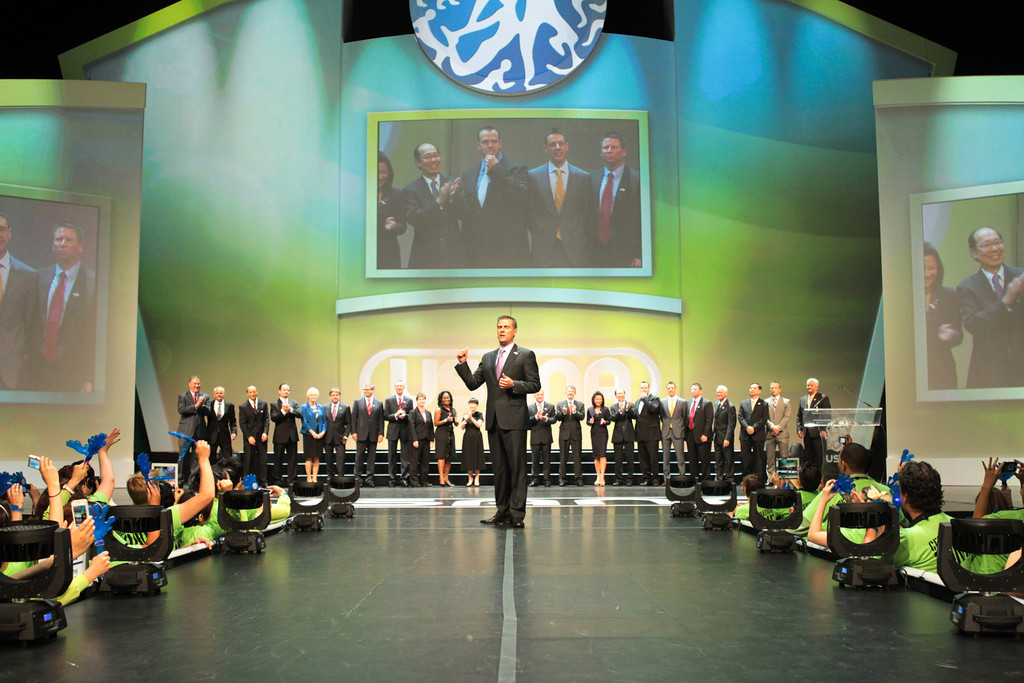 USANA’s International Convention always brings excitement, but this year there was an extra something in the air. USANA celebrated its 20th anniversary in such a way that it made a huge impact on everyone, including the members of its management team. Roy Truett, Jim Bramble, Michelle Merriwether, Alan Bergstrom, Shawn McLellend, Belynda Lee and Paul A. Jones share their personal highlights from USANA12 below. 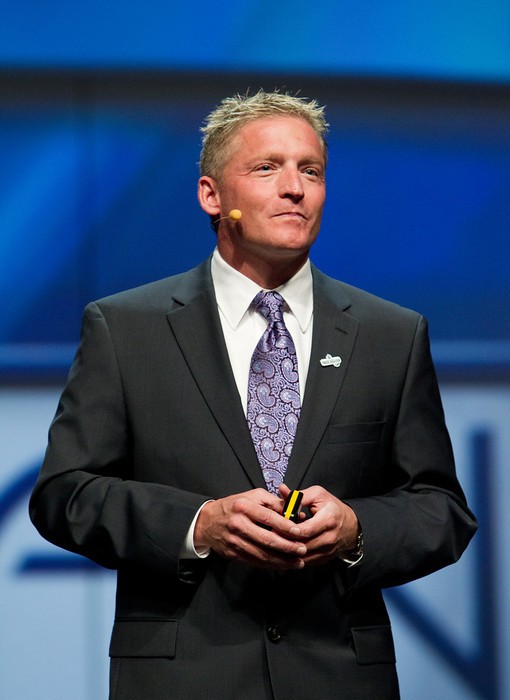 USANA’s 20th Celebration was the best Convention I’ve been to! It was so wonderful to see so many leaders that have been with USANA through all the years and look back to see how we all continue to grow.

I feel blessed to work for such a wonderful company that surrounds me with amazing people and products every day.

One of my favorite parts of Convention this year, was being on stage with such an incredible management team (especially in all our leotards).

I appreciate all Dr. Wentz does in helping develop the Children’s Hunger Fund and was glad to be a part of such a great cause.

I’m already looking forward to 2013 AP Convention and many more years of growth and expansion with USANA. 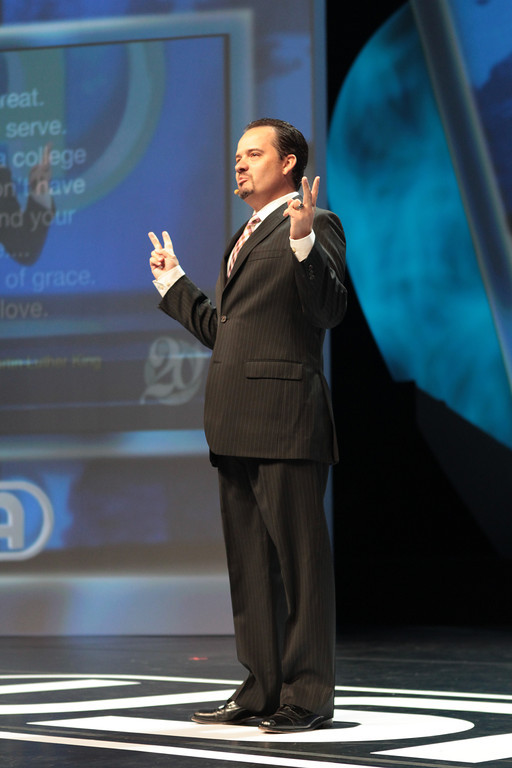 I have been part of the USANA family now for 15 years, and one thing I have come to learn is that each Convention will be the highlight of the year for me.

This year was certainly no exception. There were so many incredible moments for me, including Dr. Oz, Dr. Northrup, Libby Weaver, Dr. Wentz, the special recognition of my good friend Dr. McDonald for his retirement, and running in the Champions for Change 5K alongside Dave Wentz in a superman costume.

Ricardo listened to the incredible information offered by Darren Hardy and learned how he could change his life. Later, he couldn’t hold back his tears as he listened to Collette Larsen and her daughter, Sharlie Kaltenbach. His heart was touched as he realized he shared with USANA a common goal of changing people’s lives. One of our great Associate leaders met with him and arranged a meeting with Dave Wentz.  He enrolled as an Associate before Convention was even over and is already a platinum pacesetter.

Ricardo’s explained his thoughts as Convention ended. “I could not help but wonder if it had all been a dream. The whole USANA family is a wonderful universe full of people who inspire others to follow in their footsteps. True leaders. It is a thrill to be on board, and I can’t wait to see what the future holds!”

I think Ricardo got it right. We are all lucky to be part of this wonderful universe of people in the USANA family. I look forward to the next 15 years, and I, like Ricardo, cannot wait to see what the future holds. 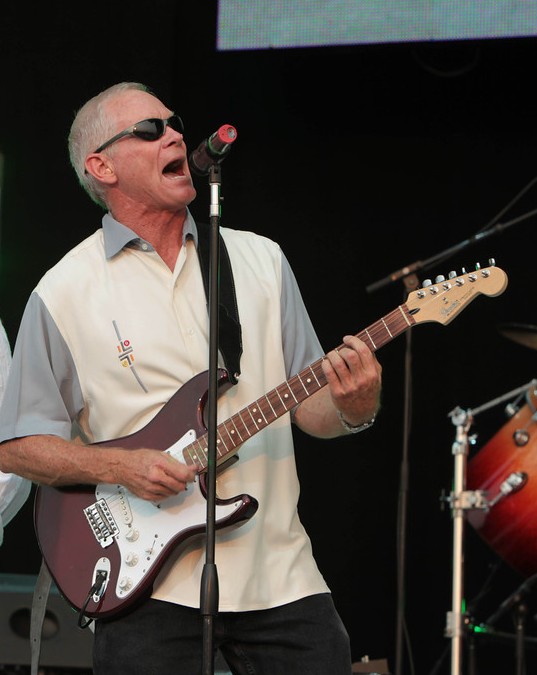 learned that we still have the most positive, motivated Distributors in the world.

I learned that it only takes a few people working very hard at making other people happy to cause an explosion of happiness. I heard of this happening many times from the efforts of our employees

I was in the rafters of the ESA when Dave announced the new USANA app. You could almost feel the stillness as many people considered whether this would be a good thing and how they would get their hands on an iPad. Then he told them of the 20th anniversary gift and the roof literally shook under my feet for five minutes.

I loved the energy that stayed through the whole event from the supportive crowd at the USANAFest to the last cheers at the closing session.

I am so glad we were able to have so many Distributors and employees from France/Belgium to the International Convention. They were all amazed and there would have been no other way to communicate that feeling.

I loved that we focused on the Distributors. In my conversations with them it was obvious that they recognized and appreciated the attendance. Many commented that this felt more like the old USANA, but somehow better.

There were so many smiles and friendly greetings from the record crowd at the True Health Foundation Run.  It was like a really big family reunion.

We had more people in attendance than ever in our history and they showed up earlier than we have ever seen. Even with that surprise our Employees never lost their smiles or their willingness to please. The wait was a little long, at times, but I never heard a negative comment from our Customers.

I hate to admit it but there were way too many emotional moments during the week and tears of pride came to the surface.

This was my 10th International Convention and most assuredly the best.  The entertainment was phenomenal, the stage was amazing, the speakers were informative and the employees were No. 1. 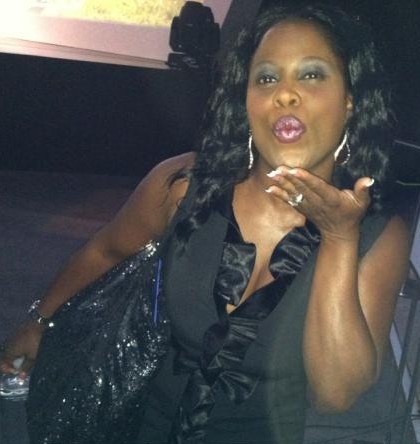 The 20th Annual USANA Convention Rocked! The excitement and passion in the building was outrageous! I am so thankful and proud of all of our Associates who attended and participated with enthusiasm at each event. Special kudos go to Lori Truman and Nathan Schooley for coordinating the best training stages in our 20-year history (as quoted to me by many Associates). Alejandro Breton and the first U.S. all Spanish launch training stage brought the spirit of the Latino culture alive in the building!

The Athlete Segment with Tim Bradley was so awesome! USANAFest, iPads and Dr. Oz! Need I say more??!! 🙂 I am so honored to lead the United States business! The U.S. leaders were outstanding onstage this year! I can’t wait until 2013!!! 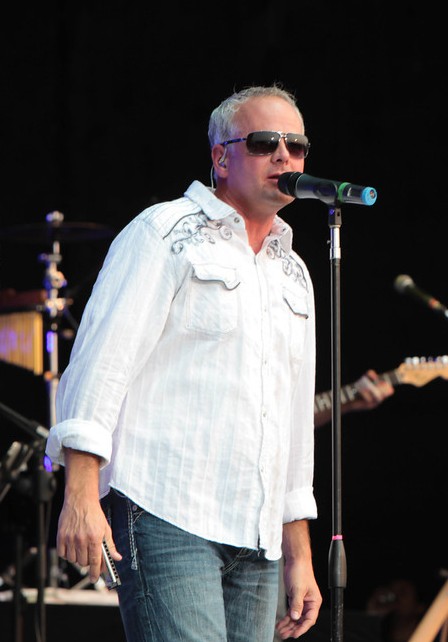 As we started preparing for this event almost a year ago, we knew it would be so much easier to just keep doing things the way we had been doing them for many years — but not near as much fun or as meaningful! So we decided to take some risks and work very hard to improve and create a new experience for all of the associates who had worked so hard themselves to bring this company to where it is today. I’m so proud of my entire staff and all of the teams across the company who worked tirelessly to bring about this epic event.

My favorite moments? Seeing the new stage set technology actually work in the rehearsals for the first time after months of planning and staring at models and computer renderings! Also, the sound in the arena when Dave announced the iPad giveaway — it rivaled the loudest NBA games I’ve ever attended in that arena!

My most favorite moments, though, were Saturday afternoon as I had the chance to speak to many USANA Associates and hear of their renewed enthusiasm and commitment to sharing the vision of this company with as many people possible.  I realized the power of our few days together and what the awesome impact will be to thousands of lives as everyone now goes to work and puts the brand promise into action! 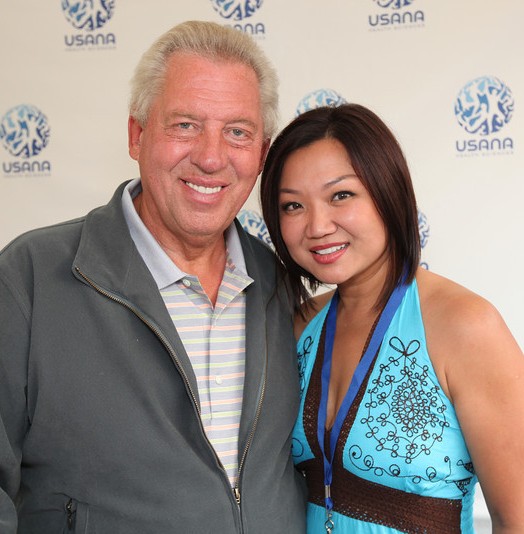 Convention this year was just spectacular! It gave everyone a sense of sharing within a family — the USANA family. Everyone felt special at different levels as if they were being touched individually. They truly felt appreciated, the energy was ultra high even after they returned home.

John Maxwell’s five levels of leadership hit home with many Associates, especially with me. Why did it resonate with me? I often ask myself, “Why do people follow me or even listen to what I have to say, is it because of my position or is it because I am merely likable?” His message was clear to me that we constantly need to examine our abilities of becoming a true leader.

We often expect others to follow us based on our position or level, however, in this industry, people follow us because they want to and not because they have to. Before they follow, they must gain trust and before the trust comes respect. So before we lead, we need to ask ourselves this — are we even respected? As you build your team, consider respect as your highest level of achievement.

USANAFest, the rebranding efforts, the great strides in becoming the “best” personalized nutritional company in the world, the iPad giveaway, the unbelievable stage setting, and so many other aspects of the convention were absolutely FANTASTIC, but the best part of all, as always, were the people. Seeing the smiles, the enthusiasm, and the love people have for the vision to help others is what makes life wonderful. Thanks to all the people who make USANA so special; the employees, the associates, the shareholders, the leadership, everyone contributes to make USANA so special. Thank you to all!!

Make sure to come back tomorrow to learn what Doug Braun and Carsten Smidt thought of their first USANA Convention.

2012 Convention: The Stage is Set!
2012 Convention: It’s Bigger, Better Than Ever
Looking for a Sweet Treat? Try This USANA Retreat
WTA Athletes Inspire a New Commitment to Fitness
Get Motivated with Women in Business Events
Book Club: What’s the Deal with Gen Y?
3 Reasons You Must Attend Convention 2012
Customer Service Team Keeps Making Us Proud
4 replies