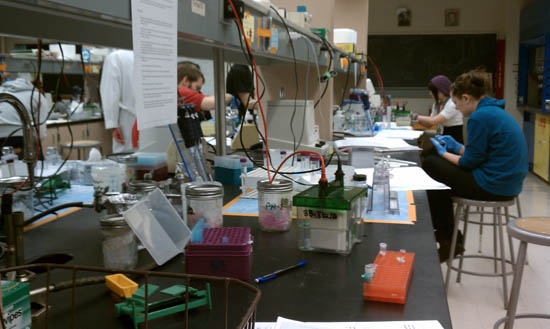 The principal investigator at the Linus Pauling Institute (LPI), and associate professor in the Department of Biochemistry and Biophysics starts his act early — 6:30 a.m. in Eugene, an hour’s drive from Oregon State’s Corvallis campus. By the time he reaches his desk about 8 a.m., plenty of balls are already in the air.

“My to-do list is never-ending, it seems,” Gombart says. “There’s always something new being added, and it feels like it’s more than gets crossed off.”

If it’s Tuesday or Thursday, he’s busy teaching undergrads and graduate students. That means seven of his 10 working hours at OSU will be spent in the lab classroom and a few more will be used shaping a new generation of scientists in lecture.

Throw in time spent mentoring students doing research in his lab — he tries to have a formal sit down once a week to discuss their projects — and you have quite an impressive display of juggling skill.

But that’s not all. There’s also the lab he runs, and the research about vitamin D and immune function, which is his biggest priority. Trying to understand how the important nutrient functions in human immune response requires copious lab time.

Gombart doesn’t get to do much hands-on work in the lab, but he’s busy overseeing research activities, providing guidance on research projects, and dealing with the small things that come up, things like authorizing lab purchases and anything necessary to keep the lab running smoothly.

Managing the lab is one thing, but the majority of his scientific workload comes from analyzing the research and working it into possible journal articles. Gombart says the number of publications is a major indicator of a scientist’s productivity.

These publications do more than push science forward. And, as the principal investigator, he’s the breadwinner for his lab. Grant proposals need to be written to fund the lab’s many studies and projects. Without that money, there are no balls to juggle.

Just for fun — to add a few more degrees of difficulty to keep it interesting — throw in committee appointments that deal with things like curriculum issues, hiring, and interviewing potential graduate students.

Add faculty meetings for LPI and the Department of Biochemistry and Biophysics, and a book about vitamin D that Gombart is editing — chapters are due soon so the book can get published this year. It’s a performance worthy of a television audience.

Gombart flips off the office light about 7 p.m., and turns towards home. All the responsibilities stay in the air as he heads south on Interstate 5. After he deals with things at home, he’s back at it for a few hours in the evening.

It’s more paper writing and reading the journal articles he didn’t have time for at the office. It’s a lengthy day, he says, and the next morning at 6:30 a.m., he starts juggling again.

“You definitely have to have a passion,” Gombart says. “Also, it’s important to have a desire to improve human health — the human situation, because it makes what you’re doing important. It’s great to be doing something because you enjoy it, but it’s nice to know that what you’re doing may have an impact or payoff for somebody else.”