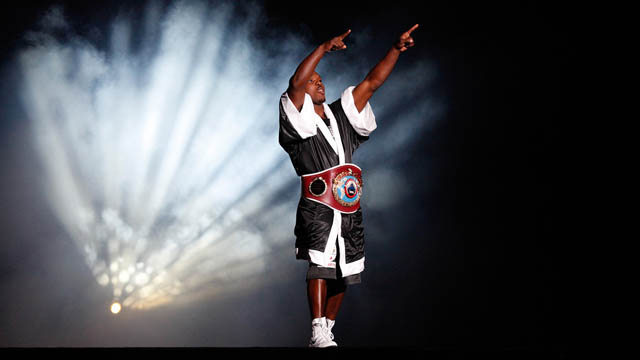 The meatball was big as a fist — maybe more — and riding sidesaddle on a small mountain of thin, round noodles slick with red sauce. Now it’s more than half consumed, a beefy crescent moon rendered in three dimensions.

The man in the grey hat with TB stitched in black and wearing a black USANA polo did the best he could. Nobody ever finishes it, the waiter says. Everybody tries to knock the meatball out, nobody does. Each one is left nearly consumed but holding on by a thread of muscle and spice. 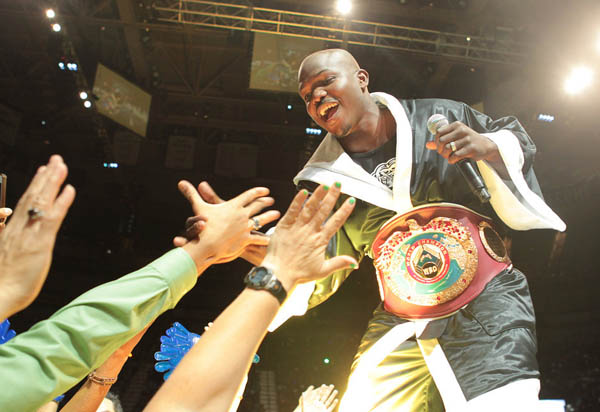 You could say the same of the man who just set down his fork. Timothy Bradley — four-time world champion, current World Boxing Organization welterweight champ, defeater of Pacquiao, shocker of the world — is almost finished, nearly consumed by a day of adoration, and activity. It wouldn’t surprise me if he was the most photographed man in the world during this Friday at #USANA12. Everyone who saw him and his big shiny belt took a piece of him, and Bradley was happy to give it.

Even on one hour of sleep, after a day 12 hours and counting, with so many forkfuls of energy already carried away, there’s always more Timothy Bradley is willing to give. Nobody has been able to finish him, either.

By the time my fist meets Tim’s over half a platter of clams opening out of a pool of butter and herbs at an Italian place on Salt Lake City’s east side, I’m used to it.

The first time you see the balled right hand, you can’t forget what he uses it for. Punishment. And he gives plenty of that inside the ring — that’s why he’s undefeated and one of the very best in the business.

Outside the ring, though, the fist flashes for a different reason. It’s payment. For agreement. For insight. Mostly for a good joke. It frequently accompanies a big, contagious laugh that bursts from his compact, muscular frame like a haymaker, forcing him to cover his mouth to cushion the blow. 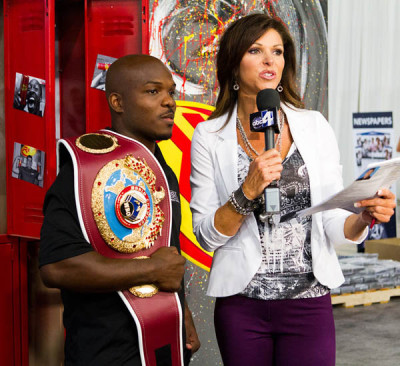 Timothy Bradley is interviewed for an ABC-4 Good Things Utah segment during the 2012 USANA International Convention.

Tim gives the laugh freely. His smile, too — nearly as large as his WBO belt and beaming almost as bright. In conversation, he has stories to share, as well. The most animated one was about a prank they pulled on his dad, Big Ray, at the start of a training session.

Big Ray hates snakes. Joel Diaz, Tim’s trainer, happens to catch them on his ranch — rattlers, big ones. Joel cut the rattle off one of his conquests and brought it into the gym. He snuck up behind Big Ray and shook it. The elder Bradley jumped back and threw his hat at Joel and left angry. Tim laughs as he tells it, and you can’t help but join him.

Most of the stories Tim tells are about his family. A trip to Hawaii. The goings-on of his son’s football league, where he’s the president and his wife, Monica, is the commissioner. He’s also excited about taking the family to Disney World. It’s huge, he says. And Tim’s really excited to go see the lions and tigers.

Tim ordered a Coke to wake himself up. His eyes are the only thing that occasionally give away how tired he is. The day started with TV, then an appearance in front of thousands of screaming Associates in the EnergySolutions Arena — he admitted to being nervous backstage, but you’d never know it with the way he prowled the catwalk and owned the stage — then lunch with fellow Team USANA members, then more media, then a signing and photo session, then a tour of the USANA facilities, and finally some clams and a big meatball before heading back to the desert so he can make a Cowboys-Chargers game the next day.

The hour of sleep is a product of bouncing from Shark Week to a show doling out financial advice and from YouTube video to YouTube video. He’s no stranger to the wee hours, though. Sometimes Tim doesn’t sleep, kept from slumber by a focus on what’s ahead.

There were some sleepless nights before the Pacquiao fight. It’s safe to say there’s more to come. Training starts again very soon. The break was nice, but Tim’s ready to get back to miles ran through the desert, tires waiting to be flipped, hours working the bags. There’s no fight lined up right now, but Tim’s the champion, and he always has to be ready. That means no more Hawaii, no more Cokes, no more giant orbs of meat — back to the strict training diet, back to the focus on being the best.

But training doesn’t mean the end of everything. There will still be fun — it’s a prerequisite for training camp. He’ll still get a laugh when he says things like, “Miley Cyrus is saying something,” he says at lunch about the reaction to the Pacquiao fight. “That’s when I was like, man, I made it.”

There will still be words spoken from the heart. Tim will still be taking compliments graciously, the softness of his voice when he thanks people showing he’s genuinely grateful for the praise.

There will still be more to give. But Tim Bradley — father, husband, champion, mensch — will still be up to the task. Whether inside the ring or outside, nobody has been able to totally exhaust the man they call Desert Storm. 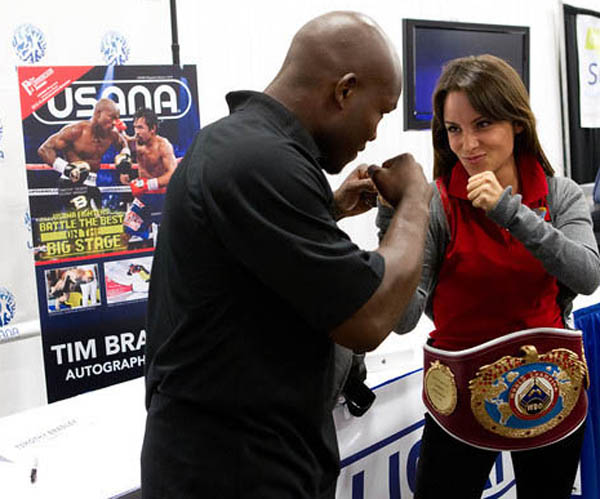 One more thing you should know about Tim Bradley: He’s quick, and he likes to pay for everything he gets — he feels like he’s gotta earn it. You see it in the ring and on HBO’s 24/7, but it’s more impressive in real life. Perfect example: The check comes. Everyone has their cards ready, but Tim somehow grabs the bill first. He’s going to pay, and there’s no fighting with him about it — not that I’m stupid enough to fight the world champion about anything, especially who pays for his meatball globe.