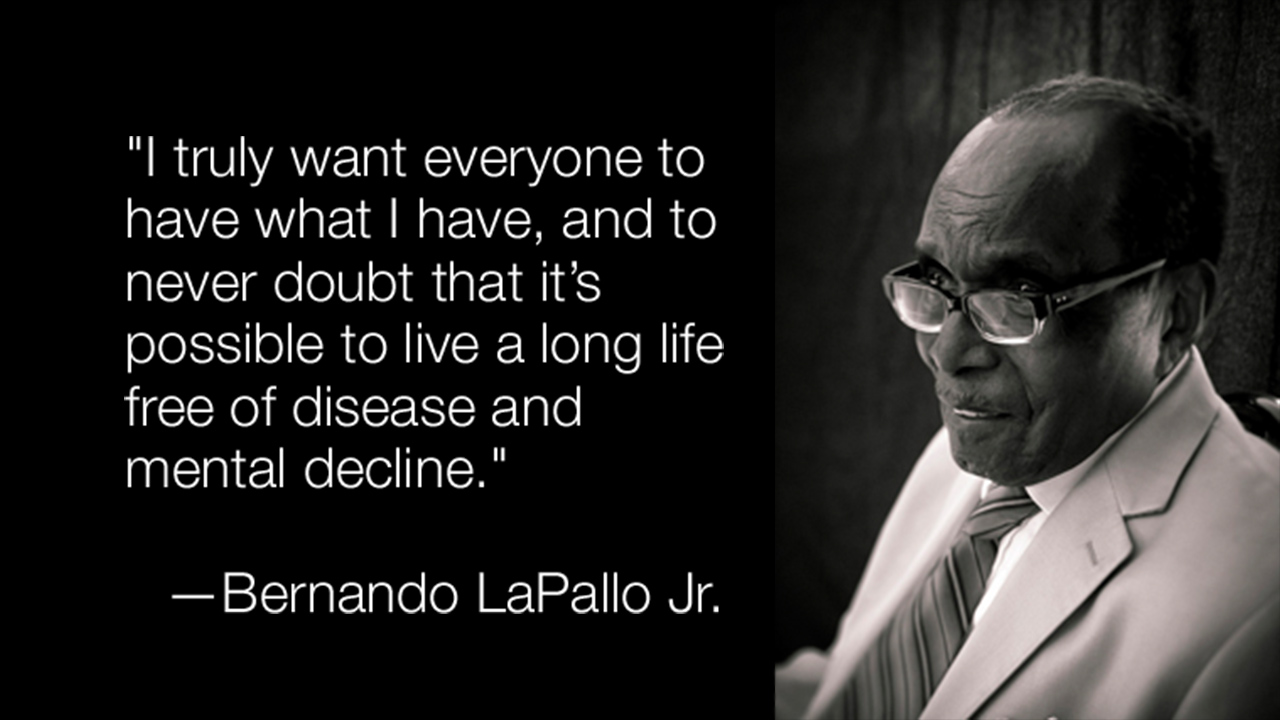 In December, Bernando LaPallo Jr. joined USANA. We’re excited to welcome all new Associates into the USANA family, but Bernando is special for a number of reasons.

Like so many before him, Bernando came to USANA because of his family — his daughter and granddaughter are also Associates. When they explained they could work together as a family, Bernando agreed.

“It’s important to me to leave a legacy,” Bernando says. “I like the fact that I can will my USANA business to my family so they have something after I’m gone. My family is very important to me.”

What makes Bernando’s story different is not how he came to USANA but his life leading up to that moment — all 111 years leading up to it.

Bernando grew up in Philadelphia and New York. As a young man, he moved to Paris to study culinary arts at the Sorbonne. He graduated in 1928 and was working as a chef for many years, including time in the Merchant Marine during the Great Depression. Following his service, he returned to New York and raised his family.

When he was 73, Bernando completed courses in reflexology and podiatry at NYU. He had his private massage practice in New York for more than 20 years. 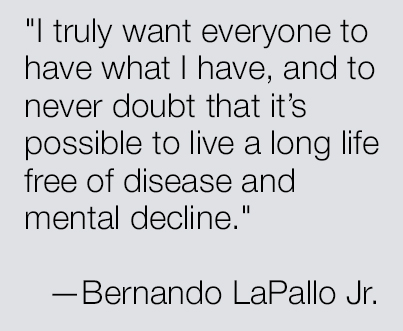 He now lives in Arizona and devotes his time to sharing his secrets of health and vitality. He lectures regularly and is a sought after guest for radio and TV appearances.

It takes someone special to outlive the gramophone, record players, 8-tracks, tapes and CDs (well almost). It boils down to this:

How exactly did he accomplish all this? I’ll let Bernando explain.

Bernando has lived, and continues to live, an amazing life. As he moves closer to the 112-year mark, he says his health is his biggest accomplishment. “I can hear. I can see. And I can remember.” 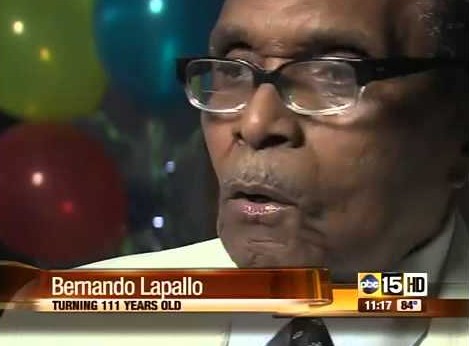 Bernando’s story has been featured on a number of news reports.

He attributes his longevity to two things: obedience and moderation.

“In the Bible it says to obey your parents and the laws of God and your days will be long and healthy. I have obeyed my parents, and I am the living proof of that. In other words, understand the laws of nature and follow them and those teaching them to you.

As for self-restraint, Bernando says you can have anything you want, but it must be in moderation.

Exercising the Mind and Body

Bernando looks after his body. He keeps his colon clean and pays special attention to his eyes and feet. He soaks and lubricates his feet with oil and then puts on clean cotton socks before bed. It keeps them soft, he explains

Bernando also takes exercise  — both of his body and his mind — very seriously. He walks a mile each day, outside if possible and on a machine if the weather is bad.

“Walking is the best exercise you can have, and it is the cheapest,” Bernando explains. “The smartest thing to do is walk on a regular basis, but don’t overdo it. … I’d say start with a mile and then work up to two miles round trip. Since you are human, take care of your body like a temple and if you do so it will last longer.”

Bernando wakes up at about 4:30 every morning and moves his joints around before getting out of bed. Then he gets up and does a few more warm-ups. He takes his walk between 6 and 7 a.m. when there aren’t too many cars on the road and fumes in the air. “When it’s quiet,” he says, “I can concentrate.” 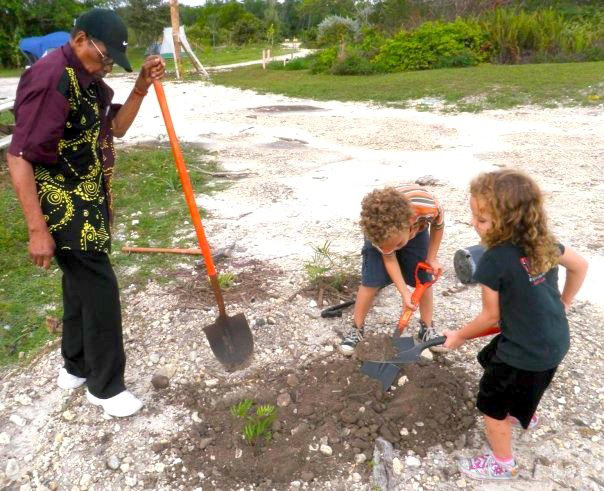 Bernando plants a tree with his great-grandchildren.

Making sure to get enough Vitamin D is also important, Bernando says. He aims for 45 minutes of sunshine daily.

“When I used to sail at sea, I used to get up very early in the morning and walk up and down on the deck getting the fresh salt air in my lungs,” Bernando remembers. “I am sure that is one of the reasons I have lived so long. If you think about it sitting around all day at a desk is not good for you. It’s important for the body to get exercise. So if you have to sit at a desk get up periodically and walk up and down the corridor.”

Keeping your mind sharp is key, Bernando says. He accomplishes that by reading and doing crossword puzzles. “It keeps your brain functioning. You will come across a word, and you will want to find out about it.”

You’d think a man of his age would slow down, but Bernando has a number of things on his plate.

The 111-year-old is working on a second book, which he hopes will come out later this year. His first book, Age Less, Live More, focused on the secrets to long life Bernando’s father, a doctor an herbalist shared with his son. In his second book, Bernando will discuss the historical origins of different foods and how they benefit people. It will be released as an e-book with lots of photographs and videos.

Bernando and his granddaughter Ekayani.

Bernando currently shares a house with a longtime friend, although he is looking forward to moving into his own place later this year. “He yearns to be completely on his own as he treasures quiet,” says his granddaughter Ekayani Chamberlin.

Living on his own is just one of Bernando’s goals for the future. His goals, however, aren’t too different than ones of the past.

“My goal for the future is to try and live the same type of life I have been living up to now,” Bernando says. “Ain’t no sense in changing. I have been doing the same things for over 100 years. I consider myself very, very blessed that I can get up everyday and shave my own face, fix my own breakfast and can go to the bathroom by myself without any assistance. My goal for this summer is to release my second book. I am making plans to live cuz I know I gotta die.”

Bernando is an inspiration to everyone he meets, especially his family.

“He has been nothing but inspiration to me,” Ekayani says. “He is my mentor, my teacher, my loving grandfather. He has given me the firm belief in nature’s healing properties through his living example. …  He has shown me that wisdom is a beautiful thing and wisdom makes the human being beautiful.” 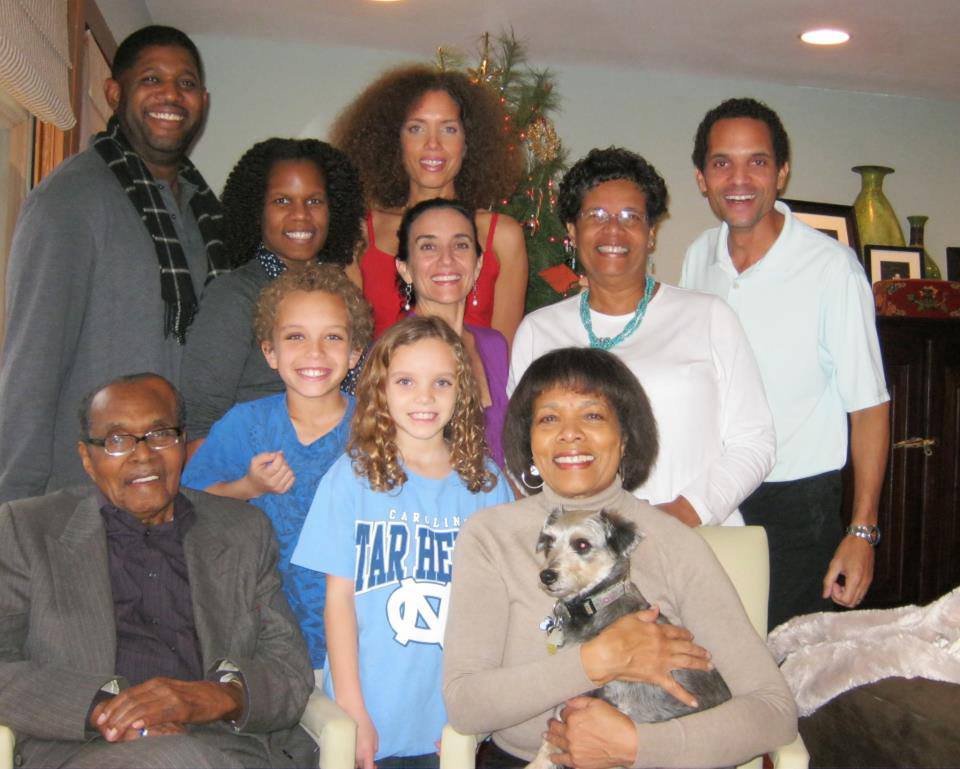 Four generations of the LaPallo family.

Yield: A gallon and a half of soup.

Editor’s note, June 5, 2013 — Bernando’s age was recently called into question after his attendance at a New York Yankees game where he was saluted. Following the game, an Associated Press article stated that while Bernando says he is 111, he has no proof. (The Social Security Administration has Bernando’s birth year as 1910.)

Bernando and his granddaughter Ekayani are currently working with the Gerontology Research Group to obtain proof of Bernando’s age. If early-life documentation (birth an/or birth certificate) can be found in Victoria, Brazil, the Social Security Administration would be forced to revise their records to show that Bernando was indeed born in 1901.