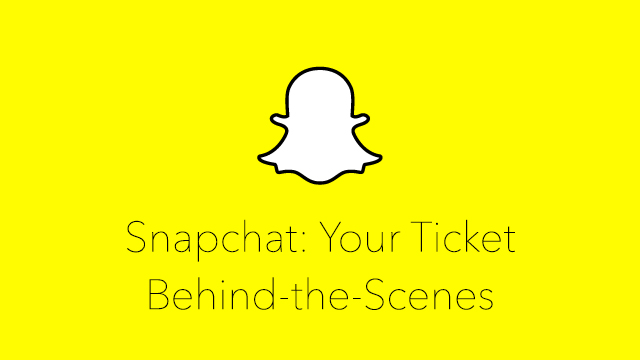 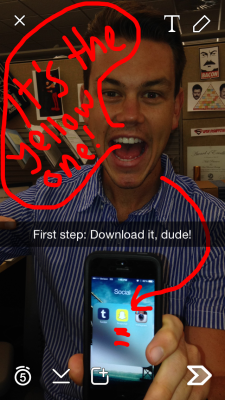 Hey guys, I think it’s time we had a talk—a very serious discussion. Don’t panic, I’m only here to shed light on a super awesome mobile application known as Snapchat. And please don’t jump to any conclusions based on a pre-determined idea of what Snapchat is. I promise it’s not just some silly app made for hormonally-challenged tweens.

Truth is, a lot of big businesses are jumping on the Snapchat train, because it helps their customers and followers see a light-hearted, behind-the-scenes view of their inner workings.

So…is Snapchat going to help you rake in millions of dollars? Probably not. But that’s not the point.

You’re working hard, each and every day, not only for yourself, but for a company that you believe and trust in, and this app is your ticket to behind-the-scenes, top secret (not really) information! Oh, and it’s fun, too. Like, super fun.

At this point, you’re pumped about it, but you’re also kind of wondering what it is, right? Basically, it’s a picture and video sharing app where the content can only be viewed for a short period of time – getting rid of that scary ‘permanence’ associated with Facebook and Twitter. 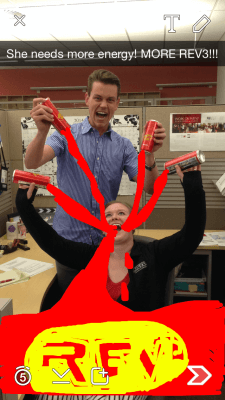 Alright, let’s keep this brief. Assuming you’ve already made the decision to download Snapchat (Which, duh, why wouldn’t you?), here’s what you need to know.

This next step is important. Head to the “My Friends” section of the app, and click on the icon of a person with a plus sign. From here, you can search for new friends—the most important two being “USANAinc” and “UwannaUSANA” (The latter is me, so you know it’s an account worth following. Because who’s cooler than me? Wait…don’t answer that.).

Now you’re ready to get snapping. What does this mean? Well, when you send a snap, it can be a photo or video—neither of which can be viewed for longer than 10 seconds. With photos, you choose who you want to send the snap to and how long they can see it. (Yes, you can even get wild and set it to one second, you crazy kid.) Both photo and video snaps have a cool doodle feature that allows you to draw personalized doodles over the snap. 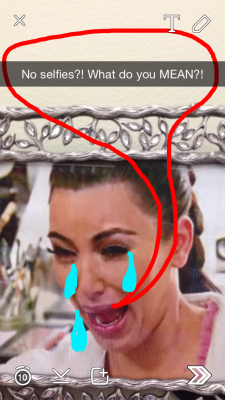 Remember to be fun and creative. The world is riddled with shameless selfies, annoying family photos (no one cares about your baby, but you), and pictures of your “delicious” dinner. Use this as an opportunity to humor your followers. Remember, they only see this once, so you can live on the edge a little.

*Watch out for annoying ‘screenshotters.’ They’re out there, and they’ll screenshot your photo at a second’s notice.

Tell us Your Story

Okay, so there’s a lot more you can do with this app, and as you familiarize yourself, you’ll discover all the possibilities. But for you newbies, we’ll leave it with what you’ve learned so far. For now, you’re good to go. 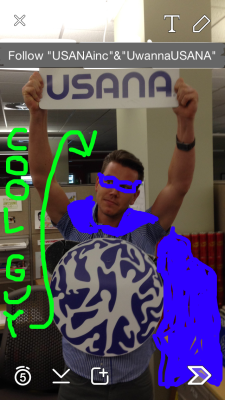 In case you haven’t guessed, we really want you to follow USANAinc and UwannaUSANA on Snapchat. It’s only because we’re excited to share the inside world of USANA with you. Ever wonder what a tablet machine looks like while it’s cranking out hundreds of Proflavanol C100 at a time? Want to get the inside scoop on what’s taking place in an executives’ meeting? How about short Q&As with USANA scientists? These are the types of snaps you’ll get from USANA.

Another thing to watch out for are snaps sent throughout USANA events. Be sure to get your Snapchat going and follow the USANA accounts before the 2014 International Convention, because that’s when we’ll pull out all the stops. We’ll give you behind-the-scenes action of what goes into pulling off a successful Convention for thousands of USANA family members from around the world.

Now head to the app store so you can get going with your own snaps. After a few days, you’ll be a Snapchat pro, allowing you to connect with even more people—and your USANA Home Office­—and proudly display your #USANAlifestyle.