Los Cabos, México is known for its clear blue skies, perfect temperatures, golf, scuba diving, and, of course, spring break, but for a few days at the end of March, it was where USANA Emerald and Ruby Directors came together as leaders, learned from one another, and recharged in true USANA style. The 2012 Emerald Ruby Retreat was held at the beautiful Fiesta Americana Grand Los Cabos Golf and Spa Resort. This absolutely amazing resort sits at the very tip of Baja California, overlooking the Sea of Cortez with nothing but miles of beaches as far as the eyes strain to see.

More than 30 USANA Associates attended this exclusive event, and, although they knew USANA would treat them royally, they had little idea of the extent! But before the entire group started soaking up the sun, USANA had planned a unique opportunity for the four Emerald Directors.

As the group mingled, you could immediately tell from their conversations and demeanor that this was a powerful group of USANA leaders, and the Emeralds were honored to rub shoulders with USANA’s elite. “It’s important that we are in sync with the management team,” says Jordan. “I like that these trips give us the opportunity to see what they are thinking, what they are doing, and learn the ways we can improve, help them improve, and all work together as a team.” 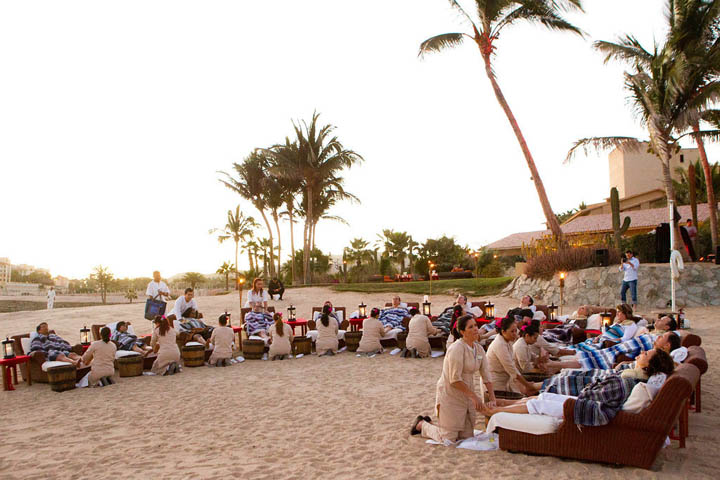 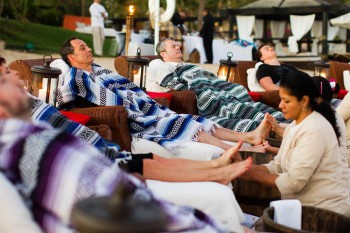 This evening, these Emerald Directors were in for a very unique experience. A guide welcomed the group and brought them to chairs perched on the grass overlooking the beach. As the sun slowly began to set, a calm ocean breeze slowly ruffled the palm trees. And while sipping their exotic drinks, the group was told they would be participating in the Barefoot Experience.

Shoes were removed and the group walked across the sand to awaiting lounge chairs. Attendants approached the group, and in a calm, zen-like state, held their arms as they stepped into a bucket full of grapes. Everyone slowly started to squish the grapes and felt them pop underneath the soles of their feet.

Once done, participants relaxed on lounge chairs and were encouraged to rest their eyes and let tension fade as they received a foot, neck, and head massage. The grapes they had smashed were now being used as a foot scrub, and as everyone let their stress slip away, attendants placed warm rice bags on their shoulders.

Chimes played softly and, combined with the sound of the ocean’s rolling waves, everyone felt as if they were relaxing in the finest spa in the world. “What we experienced was regal,” Deborah explains. “It wasn’t just a spa experience. It was the Cleopatra level of spa experiences.” Following the Barefoot Experience, the group moved to a special area of the beach, lit by tiki torches, for dinner. Flickering flames danced around the tables as the chef began to explain the food for the evening. Sea urchin soup, tuna, salad, and a beet sugared textured dessert. Not the typical Mexican dish you would expect, but then again, no part of this night had been typical.

Stars twinkled in the night sky as the group enjoyed their delectable dishes. A singer serenaded the group, and laughter filled the open ocean air until well into the evening.

“It was a chance to clear your mind,” Ellis and Roy said of the experience. “You are on the beaches of Cabo looking at the stars, and you feel blessed and grateful for what USANA has provided for you. We definitely want our team to experience this.”

For additional recaps about the Emerald Ruby Retreat, please visit USANAtoday.com and read Volume 3 of the USANA magazine, hitting homes in June.