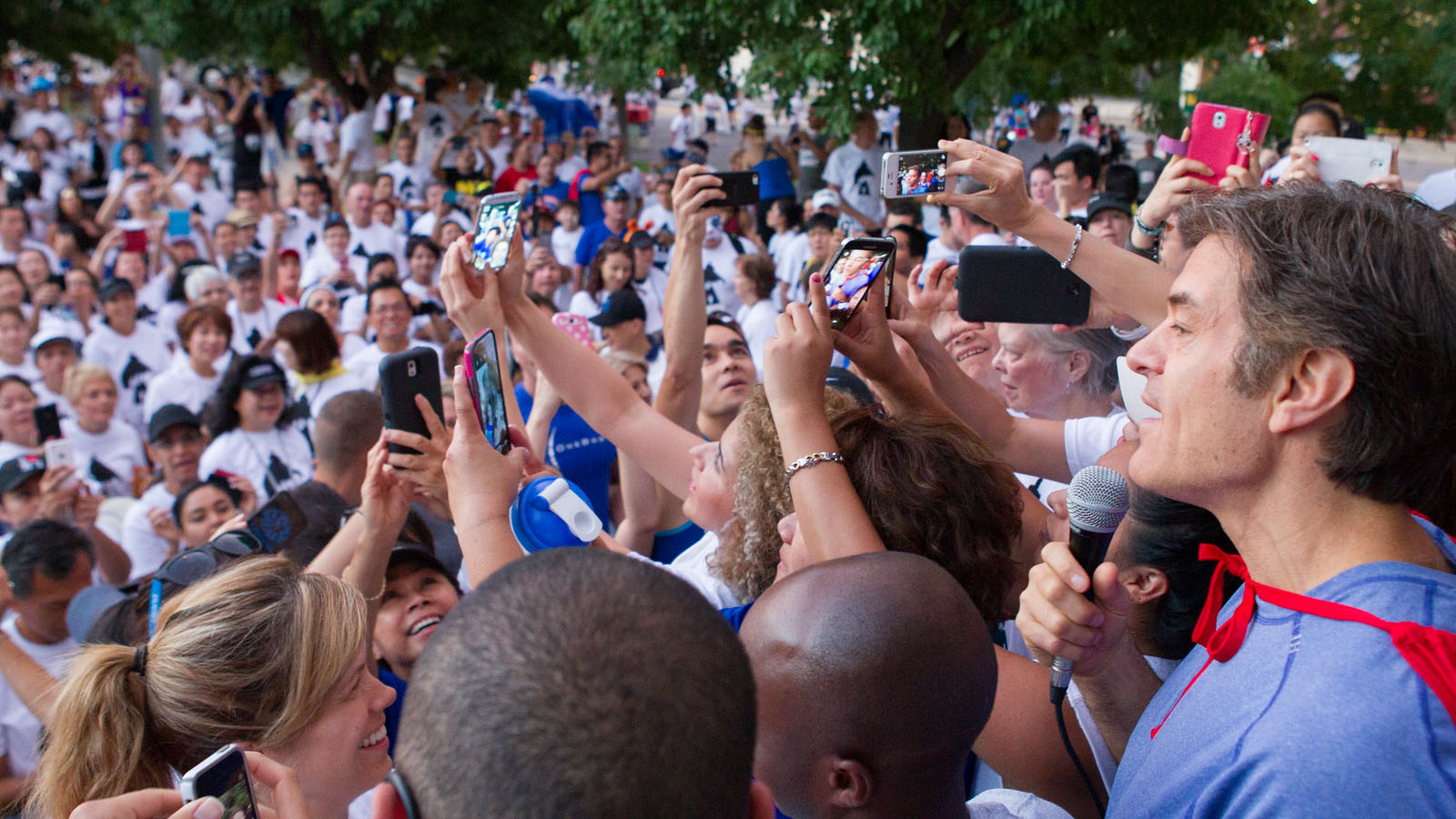 What do you do when the USANA HR department asks you to run with Dr. Mehmet Oz, host of The Dr. Oz Show, in the 2014 USANA Champions for Change 5K?

You say yes—that’s what you do.

Or at least that’s what I did when the USANA Ragnar relay team was asked to help out with security for the famous doctor during his Champions for Change run.

Dr. Oz was in Salt Lake City to speak at the 2014 USANA International Convention as a thank you to USANA for its support of HealthCorps, a non-profit organization he founded in 2003. The Champions for Change 5K is held in conjunction with the four-day convention.

Now that the race is over and the winners have been announced, it’s time to share everything with my trusty What’s Up, USANA readers, because I know you’re all dying to get in on the juicy 5K gossip. 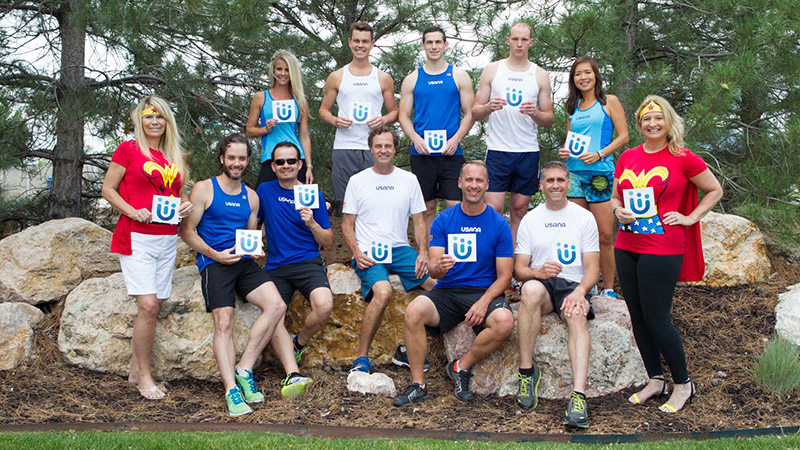 By now, you should know that the Champions for Change 5K is one of the USANA True Health Foundation’s biggest fundraising events at Convention and that all race proceeds go directly to helping those in need.

We woke up bright and early to meet with Dr. Oz at the EnergySolutions Arena (ESA), where we were instructed to keep an eye on him at all times. Not to say that our Associates are a danger to the doc, but people get super pumped at the opportunity to meet, or even snap a picture with America’s most famous doctor. (He’s kind of a big deal.)

That being said, he really did need our help getting to the starting line. 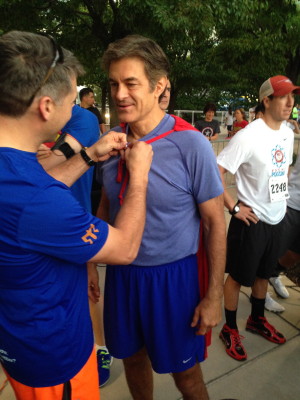 As we walked out the doors of the ESA toward the massive crowd of anxious Associates, Dr. Oz was ready to kick off the event with a friendly greeting and a healthy warm-up routine to get the Champions ready to race.

He did have a little help from Team USANA Olympians, Billy Demong, Preston Griffall, and Travis Jayner, who took the lead in the pre-race warm up. (Oh, and let’s not forget the Usanimals mascots, who were the real stars of the workout.)

And then, it was race time.

Once we successfully escorted the man of the hour to the starting line, my nerves started to set in. I’d heard that Dr. Oz keeps a pretty solid pace time. Could I carry out the mission successfully?

Just like that, the race began, and we were off!

Now, I consider myself a pretty understanding person, but less than two minutes into the race, I decided that Dr. Oz is one of the most patient people I’ve ever been around. 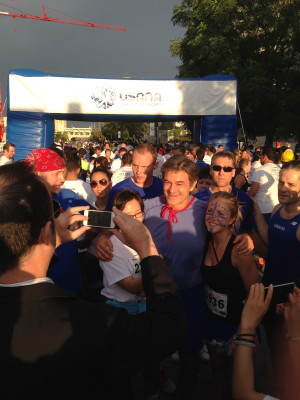 I can’t blame the runners for wanting their time in the spotlight with the doctor, but you wouldn’t believe how many times he was asked to take a selfie, shake a hand, or give a high five…all while he was trying to complete a 5K!

Eventually our protective barrier around Dr. Oz morphed into the Ragnar team running shoulder to shoulder in a circle around Oz.

He never seemed frazzled. He never complained. He took the time to greet every person that approached him and make sure they felt like he heard whatever they had to say.

Also—the crowding totally slowed his pace (helping all of us stick with Dr. Oz throughout the race), but he still completed in excellent time (around an 8 min 30 sec mile pace time in case you’re wondering). So I kind of owe those determined Associates a thank you for slowing him down, right?

Once the race was over, Dr. Oz, once again, took the time to greet runners at the finish line and celebrate his own finish.

Eventually, an SUV arrived to take the doc back his hotel, making our last duty getting him safely into the vehicle. 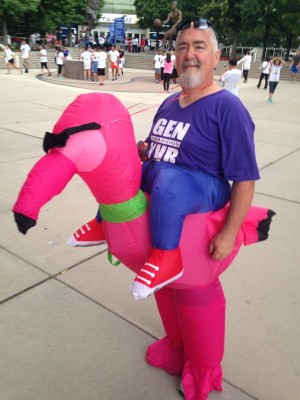 Just as he got buckled in, a woman raced to the vehicle, desperately attempting to get a photo with him. Before I could even attempt to selfishly roll my eyes, Oz said, “Better to make her day than break it.”

He hopped out of the vehicle, spoke kindly with the woman, and snapped a few pictures.

As he drove away, I realized that, besides being an all-around good guy, maybe Dr. Oz was so cordial throughout the event because he never forgot what it was all about.

Finally, I could shed my security guard duties and see all of the runners—many of them decked out in epic superhero costumes—gathered at the finish line. They were celebrating what they’d accomplished in those three miles. It had nothing to do with the running, either—it was all about the helping.

I can’t wait until we have final numbers for this event so we can all celebrate the 2014 Champions for Change 5K again! 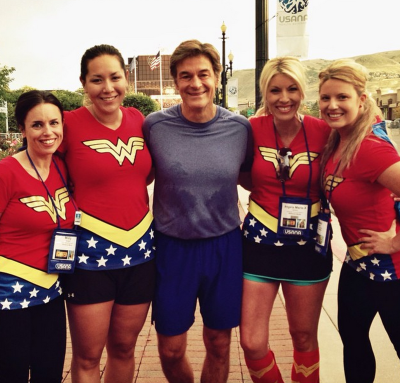 We’ll be able to see exactly what impact the event made and how much was raised for those affected by hunger, crisis, and natural disasters.

Because, while I may have had a cool experience running with Oz today, I think these numbers will show that my experience as a body guard really has nothing to do with what this event is about.

How You Can Help

No matter the trauma, crisis, or disaster, the Foundation is there to provide relief and recovery to those in need. If you want to help make 2014 an even greater year of giving, make a contribution at USANAfoundation.org. Keep up on Foundation news by following them on Twitter and liking their Facebook page.

Learn what USANA is doing to make the world a better place. The future of personalized health and nutrition is now available with USANA’s True Health Assessment.