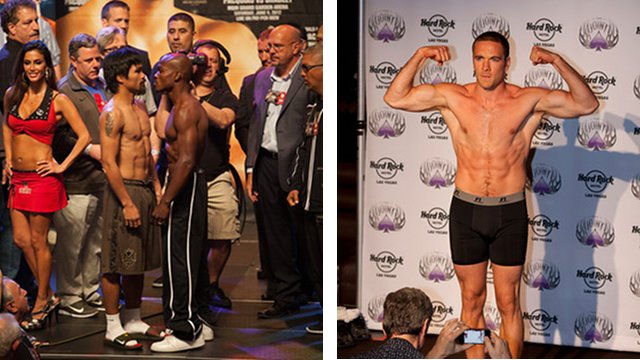 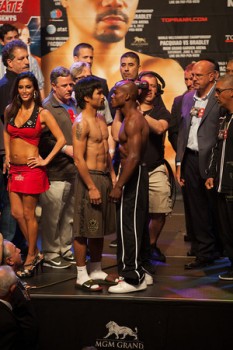 USANA-sponsored boxer Timothy Bradley steps in the ring against Manny Pacquiao on June 9, 2012 in Las Vegas. Who you got?

Music thumps at the pool, 31 floors below my window — a little too high for a graceful cannonball. Loud, neon drinks sway from the necks of people mostly in tank tops. In my head, the siren song of the gaming tables trumps them. Big bucks are being made, but not by me.

But there’s work to do. Luckily the reminders are everywhere. Tim Bradley and Manny Pacquiao glare out from the felt tops of blackjack tables at the MGM Grand, warning me to steer clear. A warning I should’ve heeded because $30 later I still don’t have one of the chips that have a picture of those same faces.

You can’t turn around without a reminder of the main event. You can’t go into a CVS pharmacy without getting into a conversation with a cashier who saw Manny Pacquiao. You can’t wear your fight credentials on the street without someone handing you a “metaphysical hip hop” album and expecting you to pay for it because they mistakenly think you’re with Manny.

Wednesday: Down $30, Up One Press Credential

The press conference is going on inside a theatre usually occupied by classic literature illusionist David Copperfield. Very apropos. A lot of people think beating Pacquiao will take some kind of magic trick from undefeated three-time world champion Tim Bradley.

The big ticket Bradley pulls out at the end of his time at the mic is a sign he disagrees. It reads “Bradley vs. Pacquiao 2, World Welterweight Championship Rematch, Saturday, November 10, 2012.” It’s a reference to the clause in the contract that would guarantee a rematch if Bradley wins, which clearly he is planning on doing.

A press conference is a lot like a feeding frenzy (check out the photos on USANA‘s SmugMug page). After the main event is over, unsatisfied reporters crowd around the prey trying to get a sound bite or a quote they hope nobody else has. The stage was a swarm of microphones, recorders, pens, paper, cameras, and questions. I was able to nudge my recorder into the fray, too.

After a few on-camera interviews, and a one-on-one with a reporter from his hometown paper, Bradley throws a head nod, smile, and “What’s up, baby?” my way. From the people pacing nervously behind the crowd, I get the feeling that Bradley isn’t supposed to still be onstage, but he takes time to talk to me anyway. 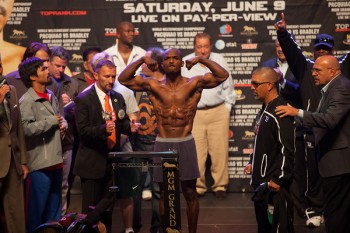 He’s smaller than the enormous photo of him used for a backdrop, but he’s bigger than I remember. He looks sharp in a light blue shirt and black suit. Bradley looks focused, even after hours of attention and the barrage of questions. This bodes well for Saturday night. But taking the best verbal punches from a group of media members is hardly comparable to the jabs and crosses of one of boxing’s best.

After about five minutes, we’re finished. I thank him for his time. Then I do something inexplicable. I wish him the best of luck on Saturday night — that’s fine, but here’s the weird part — instead of shaking his hand, I nudge him with my elbow like an annoying dad physically punctuating a bad joke. Bradley’s too busy getting escorted off the stage to notice. Good.

As we’re leaving, some stone-faced ushers — veterans of many big boxing events — start shooing the hundred or so people left in the theatre out the door. Three guys push their way to the front. “It’s OK, we’re with HBO.”

Thursday: Another $40 and an Evening with Mike Lee 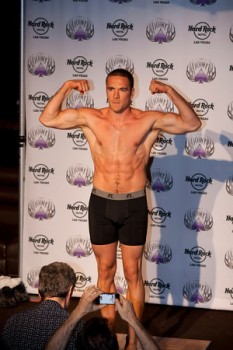 USANA-sponsored boxer Mike Lee at the weigh-in for his June 8, 2012 fight.

My phone says “Paradise.” If that’s the truth, why is it fondue hot at 8:30 a.m., and why are the tickets from yesterday’s sports bets in little bitty pieces all over the floor of my room? No answer from my smart phone.

Today is all about the man on the undercard for USANA fight weekend — Mike Lee. He doesn’t enter the ring until Friday night, but the undefeated light heavyweight’s weigh-in is today at the Hard Rock Hotel (here are photos from the weigh-in).

If it’s a battle of T-shirts, Team Lee knocks the others out in the first round. A group of USANA Associates are tucked into one of the red leather booths inside the nightclub that plays home to the event. Members of the Lee camp, including trainer Ronnie Shields, have their own booth closer to the makeshift stage.

Lee and his new opponent, Eliseo Durazo(4-2, 1 KO), are the third pair on the scales. The USANA-sponsored fighter looks like 177 pounds of pure muscle. This is his first fight since he had surgery on his right hand after his December fight in New York. Lee took the time to work on his jab. I’m sure Durazo will see plenty of them. 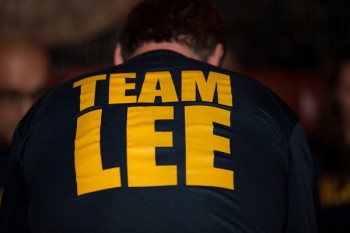 Team Lee supporters showed up in force for the Mike Lee fight in Las Vegas.

Friday: Spectacle, and $70 Down the Drain

Armando says tomorrow — today, if you buy into this “a new day starts at midnight” thing — will be the day they descend. Fight fans from around the world heading for the desert to get close to the heat. Thousands and thousands, he says. As a person who has been driving cab in Vegas for the better part of the decade, I have to think Armando has a decent idea. Cab drivers make good sources, and I tipped my guy $3 for the information.

Two ladies were standing on the concourse, less than 50 feet away from where the Pacquiao-Bradley weigh-in would be starting. As I walked by they asked me a pretty interesting question — “Do you know where the weigh-in is going to be?” I don’t know everything, but I recognize when I’m standing in the place I’m supposed to be, so I politely said, “In there.” Several thousand other people had no trouble finding the place.

Hours before the fighters would step on the scales, chants of “Manny” and “Bradley” bounced back and forth. Since they both end in “y,” they just kind of melted together. It was an overwhelmingly Pacquiao crowd, which is to be expected when you’re one of the world’s most popular boxers. He draws more people for the weigh-in than most fighters get for the actual fights. The eight-division champion also inspires people to wear plush Pac Mans on their heads. It’s good to be the pound-for-pound king. 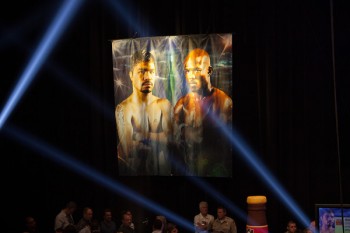 Bradley fans made a good showing even though they were booed every time they would hold up a sign. The floor of the arena started to fill in with cameramen, reporters, and on-lookers. After hours of waiting, a steady stream of fighters and their entourages start trickling across the stage. The fighters on the stage all looked thin and hungry, so I had a polish dog just for them.

Then the inevitable happened. Minutes before the two big names took the stage, someone started a wave. If you put people in a sports setting for long enough, they will stand and sit in patterns.

A tan person in a less tan suit, who I identified as Michael Buffer, announced the names that have been on people’s lips and on every spare space in Las Vegas. Bradley was first. In any other setting, getting in your underwear and having your weight read aloud for thousands of strangers would be embarrassing. He seemed to enjoy it. Bradley posed for the cameras, flexing more muscles than a human ought to have — “USANA dawg! USANA,” he told me back in May in Indio.

The cheer for Pacquiao nearly shakes the building. I couldn’t hear Michael Buffer. Sad, because that’s the point of Michael Buffer. Then, as soon as it started, the grand spectacle before the grander spectacle of Saturday night — the one moment the scale operator gets — was over.

If I learned anything so far, it’s this: Don’t play craps by yourself. And, when USANA says the best athletes in the world trust our products, we mean it. I wasn’t ready for the massive nature of a fight like Pacquiao-Bradley. From a ways away, and the with the distance of casual fandom, it still seems important.

Being here, in the belly of the beast, makes it a nearly scary, truly enormous deal. And the cool thing: if you looked in the garbage cans in the locker rooms of the MGM Grand, you’d recognize some of the wrapper and discarded packaging — it’s the same stuff that’s on your counter.

Time for a big neon drink before the Mike Lee fight — which starts momentarily (watch it on ESPN2). But the boxing is just getting started. So watch this very blog, as well as Facebook and on Twitter (@TeamUSANA) for the latest updates on USANA Fight Weekend.

Also plan on watching Pacquiao-Bradley on HBO pay-per-view starting at 6 p.m. Pacific Time on Saturday. You can also pay to stream the fight online through www.toprank.tv.