On Sept. 16, Tony Derbyshire, a Ruby Director in the United Kingdom, competed in Ironman Wales, a grueling competition that tests even the fittest of athletes. Out of the 1,093 men who finished the race, Tony finished 329th. For Tony, the opportunity to compete in Ironman came when he discovered USANA and gained the freedom to love life and live it. Tony shares his experience below.

Time Freedom – What are you going to do with yours? 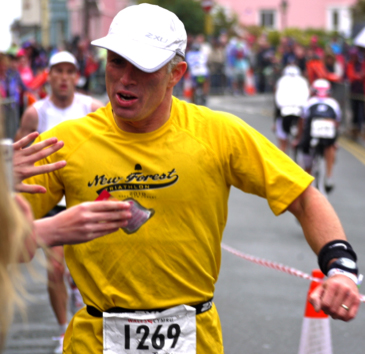 Being a U.K. Ruby Director with USANA Health Sciences has produced many positive emotions, feelings and an array of experiences. But recently, the experience was pure PAIN.

Twenty-five years ago I set myself the goal to complete in an Ironman competition — 2.4-mile swim, 112-mile cycle and a 26.2-mile marathon. You must complete these distances within 17 hours to be called an Ironman.

Life, corporate life mainly, got in the way and my goal faded somewhere deep within my subconscious. Then out of the blue I discovered the wonders of USANA’s home-based business and built up a successful global organization. This business allowed me the time freedom that I had been searching for and the Ironman goal surfaced once again.

The decision was made. To complete an Ironman you need to train around 12 hours per week for at least eight months. Good thing I had time freedom.

In 2010, I became an Ironman by completing the Austrian Ironman in 11 hours, 54 minutes. The bar was set and in 2011 I completed the German Ironman in 10 hours, 58 minutes. This was a fantastic result, and I felt like I had achieved my goal — until someone told me about Ironman Wales, believed by many as the hardest Ironman in the World. I thought I had experienced total fatigue before, but that experience was waiting for me in the Welsh hills.

About 1,000 of those athletes, including me, decided the front of the pack was the best place, and we all sprinted to the first buoy, which was around 250 meters away. Within seconds I was punched and kicked in the face, my goggles had moved to the back of my neck and I had swallowed what felt like a gallon of seawater.

Normally a cool, calm and collected swimmer, the following experience was a bit of a shock. I couldn’t breathe, my legs felt like lead and I could only breast stroke. This only made things worse: The slower you go at the front of the pack means that everyone else swims over you. The only way I can describe this is to imagine a bucket of maggots on Rev3, with a blowtorch under the bucket.

It took about a mile for the swimmers to spread out, and I had some clear water. The swim took an hour and I made my way up a steep hill, then ran to collect my bike.

The first hilly/windy 70 miles of the cycle felt OK. Then the cramps and fatigue started and the real hills appeared, one after another, relentless. To top it all, we had a moderate storm. The wind picked up and the rain fell. I watched as athletes zig-zagged all over the road with fatigue, some crashing into the bushes that lined the twisting country roads (luckily the medical support was second to none). 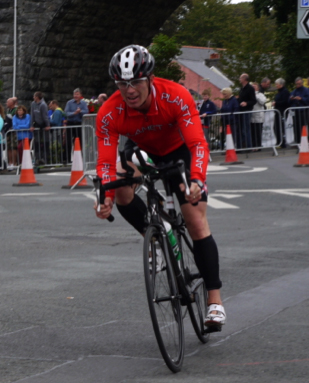 At the finish of the 112-mile cycle, my mind started to focus on the marathon ahead. I jumped off the bike, and my legs almost buckled from the fatigue, how was I going to complete the marathon?

My enthusiasm improved with the sight of my two daughters, wife Julie, mum and dad and my good friend Silver Director Darren Broad with his family.

Thank goodness for friends and family.

When they weren’t looking, the pain surfaced and reminded me how tough this race was. Most Ironman marathons are almost flat. Not Ironman Wales. It consisted of 4 loops, all starting with a massive hill that just went on and on and on.

The crowd, music, views and, most of all, the family kept me going, and I managed to complete this beast of a race in 11 hours and 54 minutes, 21 minutes faster than my predicted time.

What a day! Thank you USANA I’ve had another fantastic experience and in my opinion had the chance to be a great role model to my children.