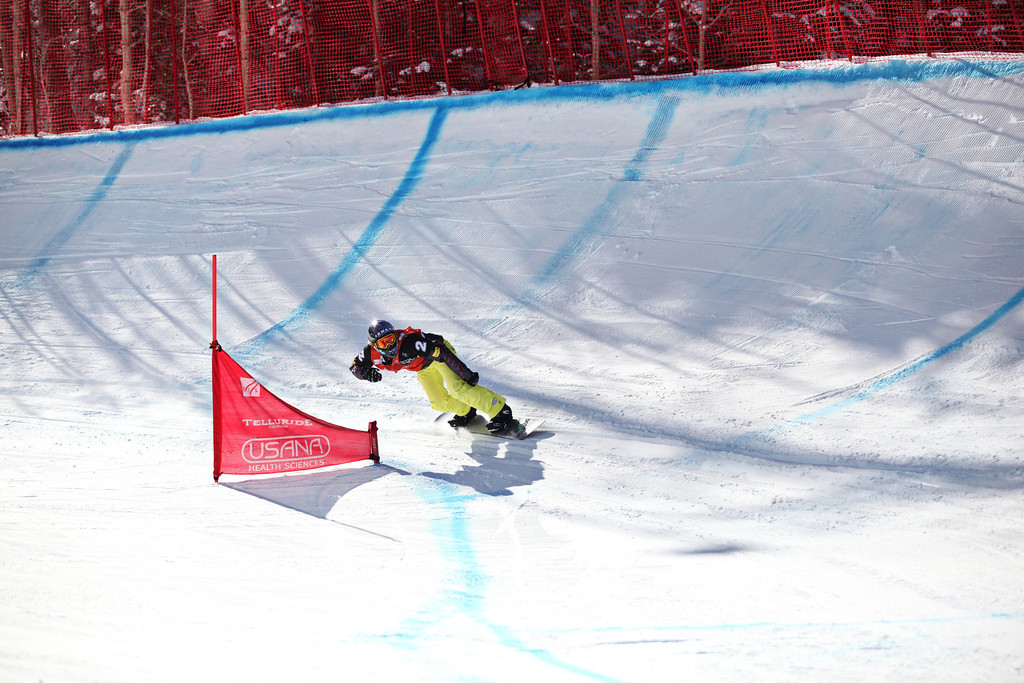 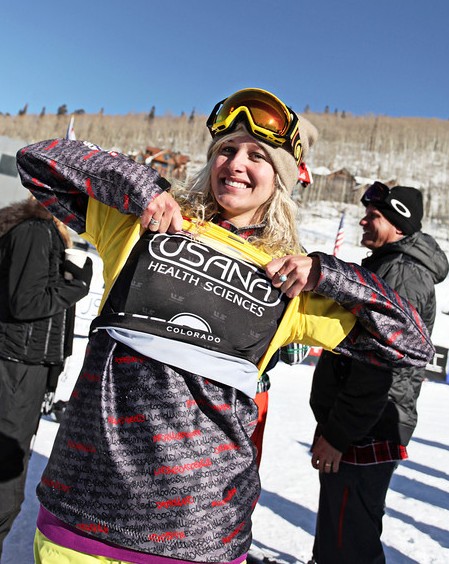 There are more than a few reasons why the first thing Lindsey Jacobellis encountered on this morning in late May was a small accumulation of crusty snow. A thin, frosty layer covered her car. The ground, too. It confused Gidget, her nearly seven-year-old Yorkshire-Silky-Terrier mix.

The most obvious reason isn’t the most compelling, by far. A wet, cold front. The mountains. Clouds too full of payload. Low temperatures at high altitudes. It’s weather. It’s boring — best left for awkward small talk.

Circumstances much more interesting and heartbreaking than barometric pressure and relative humidity strung themselves together to put Lindsey in that very place, at that very time, scraping at that very disappointing example of snow.

First and foremost, Lindsey is concerned with the Nutrimeal™. More accurately, the lack thereof.

Second, she is concerned with chili. Extra cheese and sour cream, please.

Third, she’s concerned with a time-travelling DeLorean and a wild-eyed kid and a scientist and their adventures across the future and the past. Also about people’s dislike of the third Back to the Future movie, with its Old-West setting and train that rumbles through time.

Nutrimeal has been promised, so that’s out of the way. The chili is but a few red-brown streaks on a bowl. It went down fast because Lindsey just finished a workout. Now one of the most recognizable faces in snowboarding — and heads of hair (it’s golden and frizzy and can usually be found sneaking like rays of sun from under a hand-knit cap) — is splitting a spicy chicken sandwich with her boyfriend, Jesse, who is tan, from Florida, and dried out by the Utah air. Lindsey is piling slices of pepper off to the side.

All that’s left is the time travel. The movie was on television recently, and that’s how it gets folded into the conversation. Rare is the day one of those movies isn’t on television. But it seems an appropriate topic, because Lindsey’s situation is one where you can pinpoint a major event that, by simply being allowed to happen, definitively changes everything. Basically, the reason for today’s snow, cold, and chili can be blamed on her inability to travel through time. Right here. This is where you need to go. She doesn’t ride this practice run and everything is different — theoretically. This is the main reason, the point on the space-time continuum where things splinter.

Go back in time, warn her to be careful on the final landing, make sure she doesn’t crash. If you could do that, Lindsey will probably never have to find out what her first thought would be after tearing the anterior cruciate ligament (ACL) in her left knee.

“Honestly, it’s like an embarrassing thing to say, but I was like, ‘I’m not going to be able to wear high heels for a really long time,’ and I love shoes and I was kind of bummed about that,” Lindsey says, her voice melting into a laugh. “Maybe it’s just because I was in hysterics and not thinking properly.”

Stop her from getting injured and who knows how long her hot streak on the 2012 FIS World Cup circuit could’ve lasted. Lindsey was the leader — as she has been in hundreds of races over the years — and the best start of her career. And this was the Winter X Games where she was going to win her fifth consecutive gold in boardercross. No female athlete has ever done that. So the hysterics and the momentary blip in logical and proper thought processes are more than excusable.

No injury and no surgery five days later in Colorado. No drive with her dad back to Park City. No two weeks of fatherly help and care admirably taking the place of motherly affection. No avoiding snowboarding on television because it’s too hard.

But time travel is only the providence of pop culture. Fate is not in the bargaining business. If everything was different — normal — it would look something like this: Lindsey on the beach cruiser pedaling under the just-right California sun surrounded by the scent of the ocean.

Training would be there, but so would volleyball in the soft sand, kickball at barbecues that slop into elongated summer evenings, and, more than anything, surfing. Lindsey says she loves it because it’s really similar to riding powder.

“It’s a very awesome feeling,” Lindsey says. When she talks about things she loves her piercing blue eyes seem to sparkle more than usual. “It’s a very humbling experience when you’re in the ocean, and there’s so many things you can’t control.”

The surfing in Utah isn’t great, which is why she usually wouldn’t be here. Not like she’s anywhere for too long. If you ask her where she lives, she says she’s a gypsy with stashes of provisions across the country. A couple of weeks at her parents’ house in Connecticut. Off to the Boston area to see her brother and some friends. South to Florida to see Jesse. Back to California and the surf.

In the real 2012, Lindsey is trapped inside nine television monitors in the lobby of the US Ski and Snowboard Association’s (USSA) Center of Excellence. Each box shows her on the beach with her sunny hair floating over the blue water in the background.

In the real 2012, she’s almost as trapped. She still goes a few places, but can’t stray far from the center. Lindsey says with its machines, facilities, and staff, it is the best place to heal her ACL so she can come back stronger, better.

And in the real 2012, things are getting better. Lindsey is making progress, which makes her capable of more things. Soon the beach cruiser. Surfing in September. The harder she works the more things she adds to the list of approved activities. 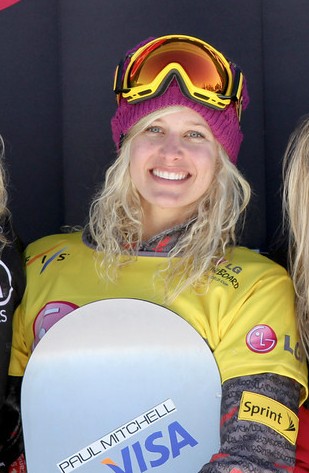 Sure, the injury is the thing that requires the rehab, which requires time in the gym. But there are another reasons — work ethic, heart, passion—that Lindsey is up just before six, early enough to catch the snow a sleepy-eyed sun will soon melt.

First up is swimming. After that it’s all leg work. There had been a lot of atrophy in her left quad and hamstring after the injury. Getting back the strength means three days of single-leg squats, hamstring curls, lunges, dragging a sled down the track, and walking backwards on a treadmill — a lot harder than it sounds, Lindsey says.

All of it sounds hard, especially when you throw in two days of upper-body workouts, running on a special treadmill that takes pressure off the joints, and plyometrics in the pool. But it’s not as hard as sitting on the therapy table and watching everyone else jogging, she says. That’s how it was for the first few months. Now she’s just too exhausted to stay up past 9:30 at night.

“I just grab it and drink it on my way, so I get five more minutes of sleep,” Lindsey says of her favorite USANA product. “It’s really nice and it keeps me going for a really long time. And I ran out today and I feel like my performance was a little held back because I didn’t get my daily protein dosage.”

Tomorrow morning there will be no snow and more Nutrimeal.

“[USANA’s purity and potency guarantee] gives great comfort to an athlete who gets tested regularly. I feel comfortable putting that in my system. … I went and saw the factory and I was like, ‘Let’s start pounding some stuff down. Let’s do this.’”

Maybe there’s another reason Lindsey found herself on the sideline. One less obvious and more cosmic. A lesson from the universe’s schoolmarm, if you’re willing to go down that rabbit hole.

But what’s the message?

Is it about snowboarding? Maybe, but she’s been on a board since she was 10 and her brother got her into the sport. She’s been going to the Winter X Games since she was 15. Lindsey Jacobellis is the name most associated with boardercross. The only thing that has eluded her is Olympic gold, which she will look to capture in 2014.

Is it about the future? Probably not. Lindsey says she’s always had an inkling of what she wanted to do after the ride was over. Either sports broadcasting, physical therapy, or personal training. The injury did allow Lindsey to enroll at Westminster College and take a class — Welby to House, an examination of how pop culture’s portrayals of the medical field have changed from the mid-’60s to today — although it’s more work than she expected. Lindsey likes the class and the busy feeling that comes with it. More courses will follow.

Is it about a personal hurdle? Could be. Lindsey says she’s already learned some patience, which is something she lacked in the past. Her rebuilt ACL — made from a graft from her hamstring — isn’t like a bone that she could feel growing, healing. All she can do is observe the restrictions, do the rehab, and wait for everything to get better.

Whatever the reason all of this happened, it’s not something she’s thinking about. She’s just working and preparing for a time both close and far away when she’ll be chasing the snow again. And not the crusty, last-hooray stuff, either — fresh, unspoiled powder that’s as much a gift from the heavens as anything.

“Every year when the first legit snowfall happens you get this rush and excitement, like a kid when you’re opening your first Christmas present,” Lindsey says. “It’s there every year. It’s fun every time. That’s what keeps going and fuels the fire for the entire season.”

Read more about the athletes and organizations that trust their health to USANA’s award-winning products in the athlete series archives.