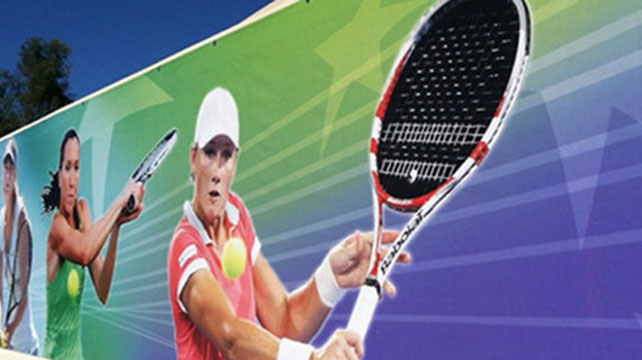 The door is closing on what proved to be a remarkable year for the WTA. For us at What’s Up, USANA?, we’re reflecting on an incredible 2012 and looking forward to what 2013 has in store. The 2012 London Games, several singles and doubles titles, a commitment to helping others, signed-racket giveaways, and more all took center stage in the past year.

It started in earnest for us in March when we traveled to Indian Wells, Calif., to meet with our Ambassadors and gather material to share with all of you. And it’s ending, somewhat bittersweet, with former No. 1 Kim Clijsters’ farewell match (a victory, I might add) over Venus Williams.

We’re sad to see Kim leave competitive tennis, but as we learned earlier this year in our exclusive interview with the winner of 41 singles titles, she’s looking forward to more family time and enjoying the quiet that can be tough to come by as a professional athlete.

“USANA has had a very big impact on my life, both as a tennis player and a mother, and has helped give me the energy I need to do both of those things,” said Clijsters. “I’m excited to see what the future will bring me and my family, and I thank USANA for their continued support.”

Here are a few notable achievements in 2012 involving USANA’s Brand Ambassadors. Special thanks to PR Specialist extraordinaire Allie Henderson for compiling this list:

“I train for hours every day and USANA’s supplements help replenish and nourish me. I know that I can trust their products because I know what I’m taking is safe and pure. I’m thankful for their partnership and am proud to be one of the 600-plus elite athletes who trust my health to USANA.”

In Case You Missed It…

We got to know several of our Brand Ambassadors a little better through various video features in 2012. The “Getting Personal With…” and “Off Court With…” series were a lot of fun. We hope you enjoyed seeing world-class tennis players on a more personal level.

What’s Up, USANA? also brought you a few exclusive videos featuring our Brand Ambassadors. Remember this one from March in which Melanie Oudin shared one of her favorite Nutrimeal recipes?

Or how about this one in which Aleksandra Wozniak offered up five important health tips?

Those and many others can be found in the What’s Up, USANA? archives. Simply click here to read all about USANA and the WTA (and feel free to share the posts with the tennis fans in your life).

Since USANA became the WTA’s official health supplement supplier in 2006, more players than ever are taking USANA. Often, you’ll see players carrying their customized WTA HealthPaks in their racket bags.

As new players join the circuit they take note of what the top players are doing and are following suit. Players’ favorite USANA products include Booster C 600 and BiOmega, as well as the Chocolate Fusion Nutrition Bar. But stay tuned, the WTA is introducing the Go Nuts ‘n’ Berries Nutrition Bar next year, so there may be a new favorite!

You may also have seen that the WTA presented a generous $25,000 donation to the USANA True Health Foundation in October!

While it’s fun to reflect on what was an incredible 2012 for the WTA and USANA, we’re now focusing attention on what promises to be an even better 2013. USANA is proud to be the official health supplement supplier to the WTA and we can’t wait to see what the new year brings.

But before we call it a year, we want to know: What was your favorite WTA moment? Let us know in the comments.