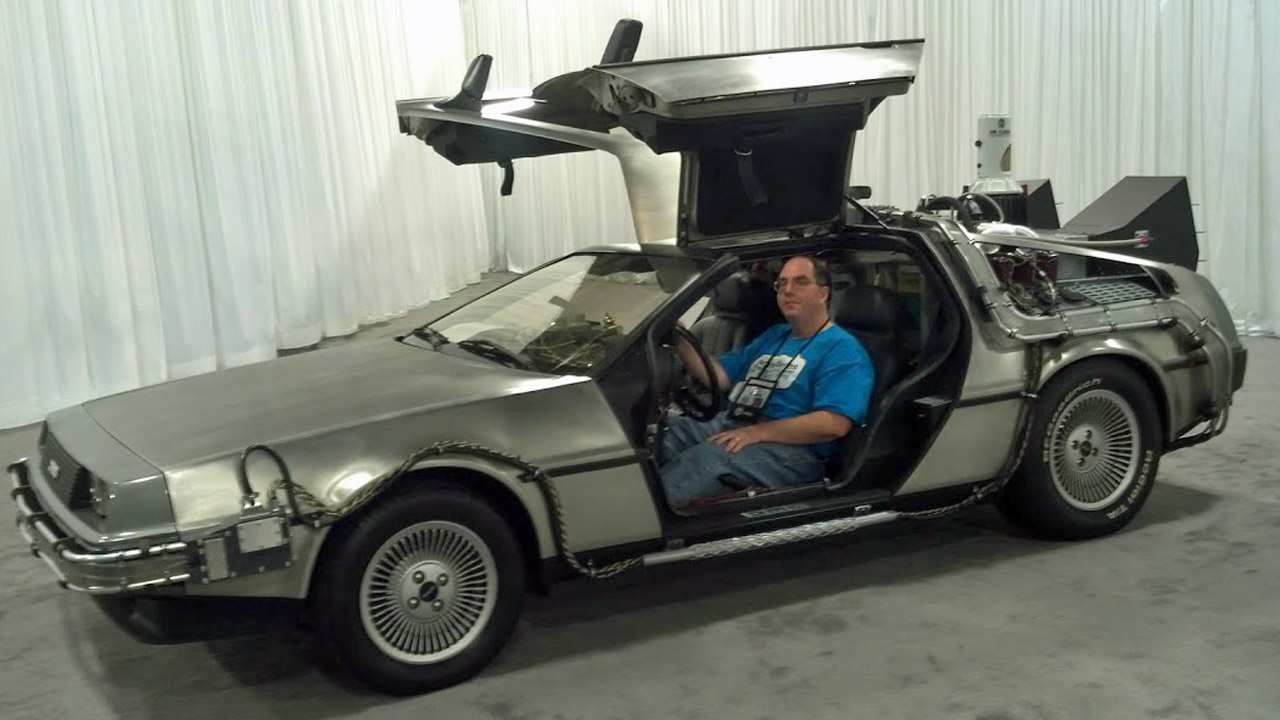 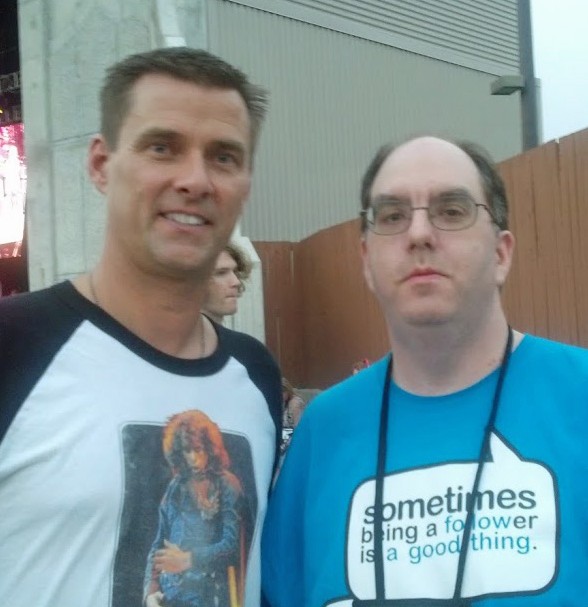 At first glance, Mark Holmes is just an average guy. He works a full-time job, is an advocate for autism awareness, spends quality time with his wife. But first looks can be deceiving, and once you delve deeper, you realize Mark is way beyond average.

Try this on for size.

This past August, when thousands of USANA Associates descended upon Utah for the company’s 20th International Convention, Mark decided to join in on the fun. But instead of flying the friendly skies, he chose to take decidedly more scenic route: a road trip from his home in Mobile, Ala., to Salt Lake City!

That’s right, Mark drove all by himself to Convention in a Smart car. Round trip, it encompassed 4,300 miles and it took Mark about 85 hours — six days total driving time. Mark’s Smart car —aka the “Nibbler” — at USANA Corporate.

The crazy thing is, Mark says he would do it again. Only next time, he’d switch up the audio entertainment. “I discovered on the way back that Dr. Wentz’s lab notes were the perfect way to stay awake through Kansas and Oklahoma,” Mark says. “Maybe I’m a geek, but that technical information was great at breaking up the visual monotony of corn, corn, soybeans, corn, corn.”

(Check out photos from his trip in the gallery at the end of this post.)

Mark is a geek.

In fact, he calls himself a Super Geek. There’s a difference between the two. I’ll let him explain: “A geek has and applies technical knowledge. A Super Geek uses that knowledge to consistently perform at near-superhero levels where failure is not an option.”

Forty hours a week, Mark works as a database administrator. He started using computers at age 7 and began “programming” by age 9 — i.e. telling a “turtle” to turn left and move a few points. Mark enjoyed playing games, but he was fascinated with the ability to control things.

Mark sits in the Delorean from Back to the Future at Convention.

Not many people can say their first “job” was designing an industry-specific payroll system for 50+ employees. Mark was 14 at the time. The company was his dad’s clothing factory.

“Since then I’ve been a data junkie and have held jobs in network administration, programming and database administration,” Mark says. “I’m now in an unofficial leadership role, ironically enabled by the leadership studying I’ve done for my USANA business.”

He says his work ethic has evolved to the point where executives trust him with the most critical systems and information.

“In past years, I was hampered by health problems, but thanks to USANA and other healthy defenses, I can thrive in the high stress environment and still deliver exceptional results.”*

Not everyone who signs up as a USANA Associate achieves their goals. For a number of reasons, many people simply walk away. Mark was one of those people. 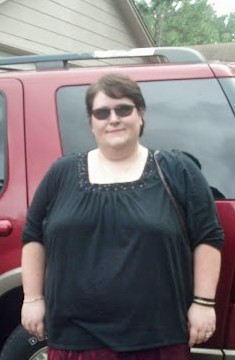 In 1996, Mark met Jeremy Stansfield (this was before Jeremy, now one of USANA’s top income earners, had even advanced to Gold Director). Mark had lost his job and needed a way to work from home — telecommuting wasn’t an option at that time. “I was young, had no friends or self confidence, so I didn’t approach the business with much energy — but I was taking the Essentials and knew the benefits. After a few years I stopped taking the products because I couldn’t afford them.”

Despite leaving the business, Jeremy’s description of residual income stuck with Mark. “In 2009, my health was declining to a pretty serious state, and I remembered that USANA had products that helped me. I found an associate on Twitter and signed up as a distributor.”

This time around, Mark also had the support of his wife, Jeannie. Though Jeannie had her own career priorities — she’s the author of two novels (Blood Law and Blood Secrets) featuring vampires and forensic science — she was supportive of Mark’s health goals. If Mark did something good with the business, that was a bonus.

“Honestly, I think it was along the lines of ‘Whatever, dear.’” Jeannie says of Mark telling her he was going to sell supplements. “I believe I was in the middle of writing my second book and was preoccupied with killing several characters. Later, my reaction was much more positive. I think Mark has done a wonderful job and enjoys knowing that he’s helping to improve people’s lives.”

Since signing up, Mark and Jeannie have embraced the USANA lifestyle — not only taking vitamins, but changing eating and exercise habits as well. The couple’s favorite USANA products — “Zombie Plague Prevention Packs,” aka MyHealthPaks. (Come on. With this couple, you knew that was coming.) 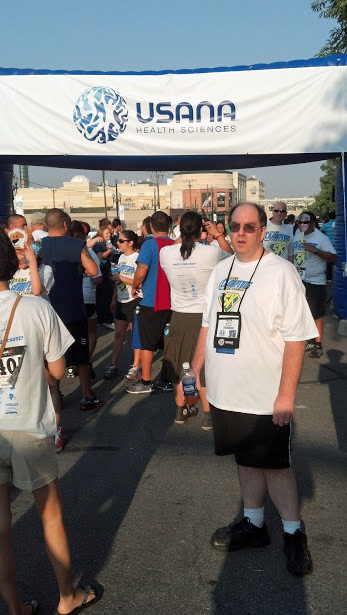 Mark ran in and completed his first 5K at Convention 2012.

“After experiencing the effects of decades of bad eating habits, I’ve learned to eat less — I take home half of my restaurant servings, for example,” Mark explains. “Nutrition is a key element now, and I’ve cut out sodas almost completely. Years ago, I took Tai Chi classes at a local school led by a Shaolin master, and I’m planning to go back this month. With my health improved, I might even be able to handle Kung Fu.”

Because of Mark’s interest in USANA, Jeannie says she’s now more aware of her own health. She was diagnosed with Type II diabetes in March 2011. “Since then, I’ve made some drastic changes in my diet, and I believe Mark’s knowledge of vitamins and nutrition has been a great addition to my own research and the information provided by my doctor,” she says.*

This year, Jeannie and Mark are also facing each other in separate 90-day weight-loss competitions. Mark is joining the RESET Challenge, which began yesterday, and Jeannie is changing to a vegetarian/mostly vegan diet for the same 90 days. Each journey will be blogged: Mark’s at My Journey With USANA and Jeannie’s at Southern Fried Tofu. Whoever loses the most weight wins. The loser takes the winner to a movie of the winner’s choice.

The competition is fun, but Mark says an overall change is even better. Even though he has already lost more than 50 pounds since joining USANA, “it’s not the weight that’s so important as the health improvement and lifestyle change.”

Coming Out of His Shell

From reconnecting with USANA via Twitter to finding his wife on Internet Relay Chat to blogging about weight loss, social media has played and continues to play a large role in Mark’s life.

“I’ve never been very good at socializing in person, but put me in front of a computer and I’ll talk to just about anyone,” Mark says. “Social awkwardness, discomfort in most crowds and with meeting new people, and some other behaviors are things I’ve just lived with all my life, and for years I stood out as ‘different’ in more ways than a ‘nerd.’” 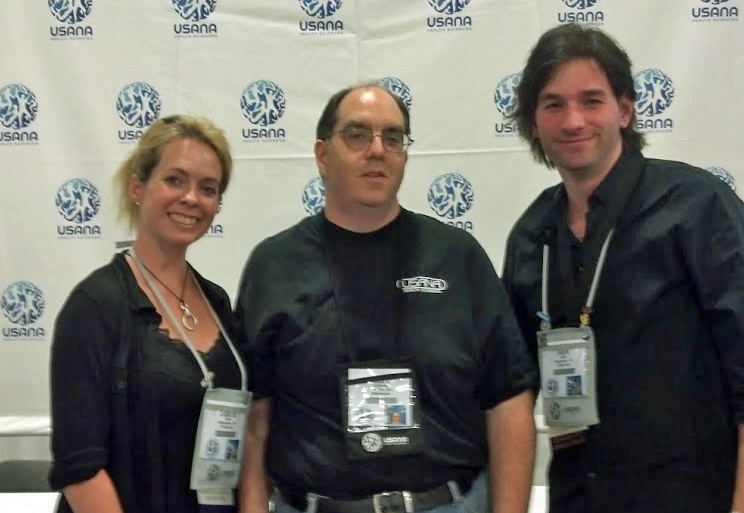 After a long while of interacting via social media, Mark met Stacia and Nick Kelly  in person at USANA’s 20th Anniversary Convention.

With time, Mark has learned to adapt and either hide or transcend most of his discomfort to achieve success. Social media is one of the things that has helped him come out of his shell. “Where years ago I was a withdrawn, shy person, now I have a little more confidence when interacting in person,” he says.

Mark is hoping his increased confidence will help him to build on his goals of simultaneously enhancing his technical career and building his USANA business.

“I used to be short-sighted, selfish and impulsive. Over time I’ve figured out that life isn’t about money or toys so much as time with family, time living the life that we want.” 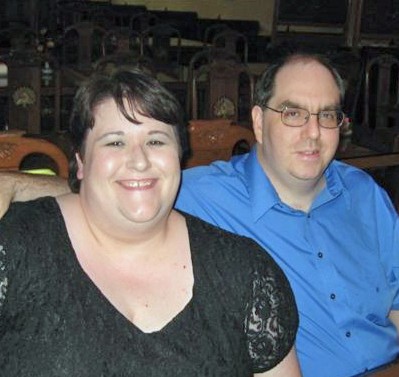 Match Made Over Coffee

Mark and Jeannie met while living in Denver, Colo. They’d both recently moved to the city and connected online. Once they discovered they only lived a few blocks from one another, they decided to meet for coffee. Five hours later, the wait staff had to kick them out of the restaurant so it could close. The couple has been together ever since — four years dating and 10 years married.

What Jeannie loves most about Mark: “Is it too cheesy to say ‘everything’? Seriously, I don’t know that I can pick one thing.  He’s smart and makes me laugh. He supports my career path, uncertain as it may be, and is always there when I need him. I couldn’t ask for more.”

Your Guide to the New What’s Up, USANA?
6 replies