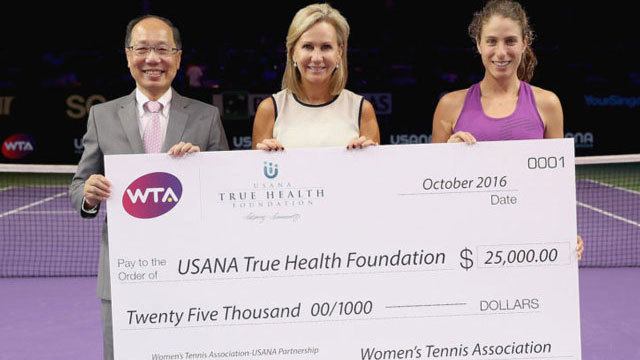 For the last decade, the Women’s Tennis Association (WTA) and USANA have remained a perfect match, and this past year has been no different.

Through the annual Aces for Humanity campaign, a joint WTA and USANA initiative supporting the USANA True Health Foundation, the WTA and USANA’s nine Brand Ambassadors have helped raise another $25,000 to help benefit those who need it most.

The WTA presented the Foundation with a check during the BNP Paribas WTA Finals Singapore presented by SC Global Thursday evening.

Beginning with the BNP Paribas Open in Indian Wells this past March, every ace served at a Premier-level WTA event translated into a donation for the Foundation. For every ace served by one of USANA’s nine Brand Ambassadors (Caroline Wozniacki, Genie Bouchard, Madison Keys, Samantha Stosur, Sloane Stephens, Monica Puig, Zheng Saisai, Kristina Mladenovic and Alizé Cornet), the WTA contributed $10 toward the campaign, while every ace served by any other player on Tour translated into a $5 donation. Throughout the year the players raised $23,755 and the overall amount was rounded to $25,000.

This year the program involved regular social giveaways via Twitter that included autographed tennis balls by the some of the WTA’s biggest names and USANA product.

“The WTA is pleased to again contribute $25,000 to the USANA True Health Foundation,” stated WTA CEO Steve Simon. “The long standing partnership we hold with USANA provides many opportunities, perhaps the most notable here in supporting this Foundation and helping those in need.” 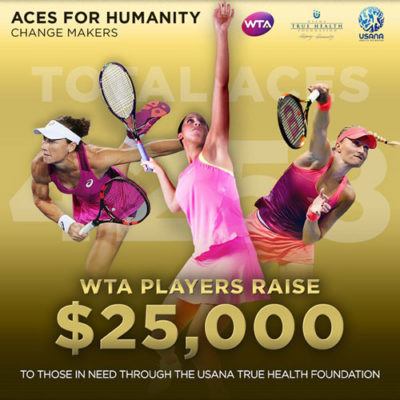 Since opening its doors in 2012, the charitable organization has donated more than $5.3 million to those in need and most recently contributed $80,000 toward disaster relief in Haiti for those affected by Hurricane Matthew. During the same time the WTA has contributed more than $140,000 to the Foundation’s efforts.

“The support we continue to receive from the WTA has allowed the Foundation to respond to disasters in a timely manner and help those in need of assistance when it has mattered most,” said Jim Bramble, board president of the USANA True Health Foundation. “We are grateful for our partnership with the WTA and our Brand Ambassadors, and their commitment to helping us make the world a better place.”

USANA is one of the WTA’s global premier partners and has served as the Official Health Supplement Supplier for the WTA for the past ten years. Since 2006 the company has provided its high-quality nutritional supplements, protein bars and protein shakes to more than 170 WTA players, including eight of the current Top 10, and 15 players in the Top 20.