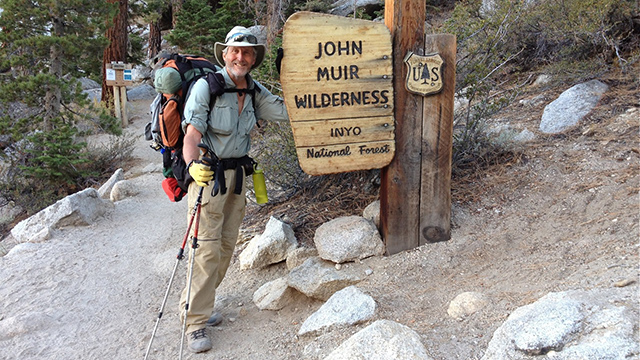 Steve’s journey began Aug. 30 in the Yosemite Valley, Calif. From there, he hiked the 211-mile John Muir Trail to the 14,500-foot peak of Mount Whitney, which is the highest summit in the contiguous United States.

He hiked alone for the first 21 days and was joined by friend and fellow climber Kat Cobb for the final six days and 50 miles of the trail.

What would possess a nearly 70-year-old man to attempt such an arduous adventure?

Quite simply — a love of the outdoors.

“I chose to hike solo so I could savor that portion of the hike unfiltered,” Steve tells What’s Up, USANA? “It allowed me the closest possible contact with nature, my God, hikers I met and myself. I even censored my self-talk language, as I often felt it was just God and me, ascending to a pass or descending into new country.”

Steve’s love for the outdoors began at a young age. He began backpacking at 12 and worked at Field & Stream magazine for 20 years. His job as an outdoors writer gave him the opportunity to visit places the majority of people will never see. As a result, he did many wilderness trips alone, including winter mountaineering trips. 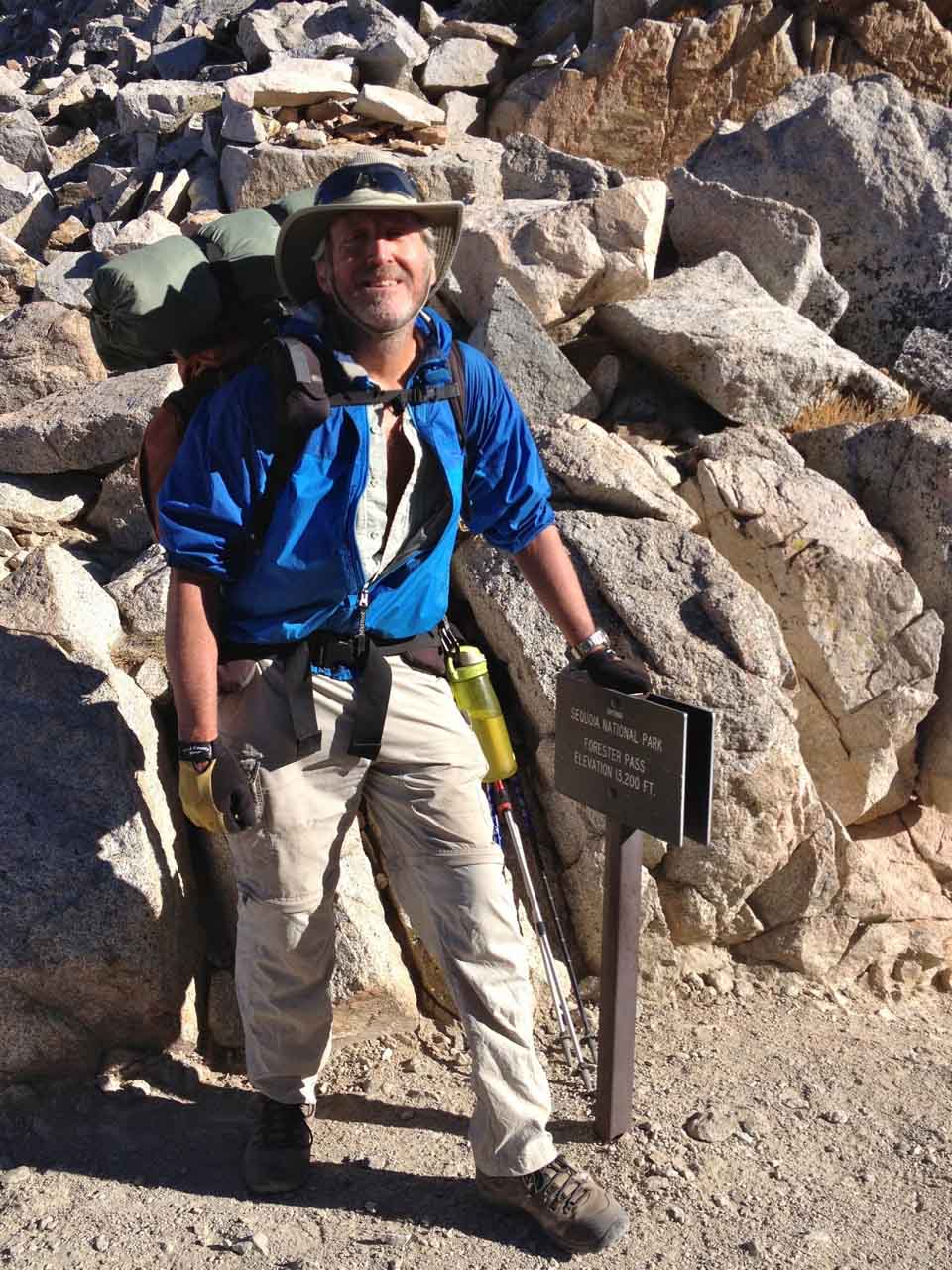 Steve on his climb.

And this wasn’t his first trip to Mount Whitney. Steve’s climbed it seven times and led three day-hikes to its summit. “Unlike many who undertake this hike, I had plenty of backcountry experience, and my body has learned all the tricks it takes to get me up a mountain,” he explains.

Despite his adventure background, Steve still had plenty of preparation leading up to this trip. To get his body ready, he spent a lot of time cross-training — road and mountain biking; working out on machines and with free weights at the gym; hiking the local backcountry with water weight in his pack, doing upper-body exercises with dumbbells; and taking his daily MyHealthPak.

Steve also read everything he could find about the hike, studied a trail atlas and plotted the planned nightly camps and five resupply points on topographic maps.

Still, Steve’s wife, Jackie, was a few steps short of thrilled. “She was concerned for my safety and argued that going on an Alaska cruise with her would be a much saner idea at my age,” Steve says. “However, once she realized how important this trip was to me, and that, at 70, my window of opportunity for doing the adventures that have been a huge part of my life is inevitably shrinking, she became supportive — as she was for my myriad of outdoor adventures over our 46 years of marriage and child-rearing.”

Steve says his family calls him an unbearable optimist; that he always expects things to turn out right. On this trip they did, with a few bumps along the way. Kat Cobb and Steve near the summit.

“I’ve used, sold, and given away many good packs over the years,” Steve says. “This time I bought a cheap pack online that looked like it had many good features, but it wasn’t up to this trip. It took animal cunning to get my bear canister and all my gear into it each morning, and at every step it banged my shoulder blades like twin ballpeen hammers. I accepted the pain as penance for my sins. I’ll take a pack next time that doesn’t preach to me.”

His biggest mistake, though, was leaving for the trip three days late. Steve figured it wouldn’t be a big deal and he could still meet Kat on time. But after a couple of comfortable 5-7-mile days, he did the math and realized he’d have to push hard to make it on time. That meant hiking as many as 14 hours and 15 miles a day, reaching camps long after sundown.

“I still fancy myself a reasonably fast hiker and I thought I would make up the time easily,” Steve says. “But JMT miles are tougher than map miles, and I proved to be slower under a 50-pound pack than I was at, say, 30. … Next time, I’ll leave on time so I can camp when the sun’s still up, enjoy some fishing and swim in more lakes.”

Without the lows, you can’t appreciate the highs, and Steve had a lot of those, too. Among them: The five showers Steve had along the way and at the end of the hike. They were near-religious experiences, he says.

In reality, every new step was a highlight for Steve. “Every day and every pass crossed, rewarded me with mind-bendingly beautiful country and unforgettable experiences. My self-talk vocabulary shrank to ‘Wow,’ ‘My goodness’ and ‘Look at that!’”

Doing a long hike is a metaphor for creating a successful USANA business, Steve says. They both entail goal setting, broadcasting your intentions to supportive friends, keeping your vision in the forefront of your mind, reveling in the journey, appreciating the difficult climbs and eagerly anticipating the view from the high passes. You often have to sacrifice the present comfort for keeping commitments and incorporate the power of positive self-talk while harnessing the magic of an optimistic outlook, he says. 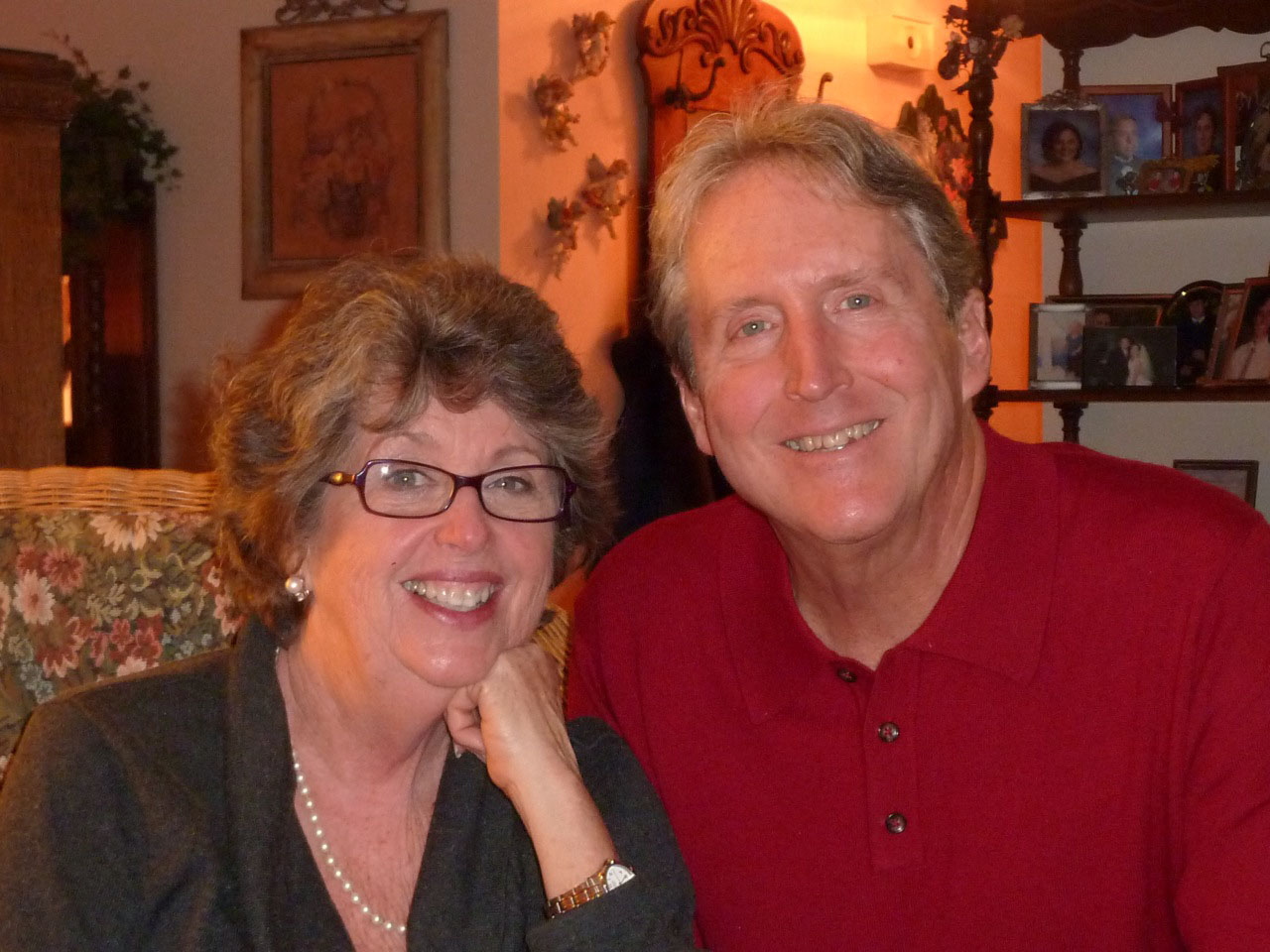 Steve, who is a Platinum PaceSetter, has been with USANA for 19 years. USANA proved to be the perfect option for someone whose long journalistic career — as writer, editor and editorial director — was interrupted sporadically by corporate acquisitions and subsequent layoffs.

“I finally realized I needed to grasp my destiny in my own hands by building my own business,” Steve says. “However, I’ve remained with USANA for 19 years for the whole enchilada: the business; the health advantages the products have given me and my family; and the great company and the deep friendships I’ve forged along the way. USANA has truly enabled me to love life and live it.”

As he transitions into the next phase of his life, Steve is settling down a bit. His retirement plan is to build his USANA business. “I want my income and options to increase as I get older, not remain stagnant as in most pension plans,” Steve says.

In addition to that, he’s writing an e-book about his John Muir Trail hike and will continue to write environmental articles and speeches. He plans to travel more with Jackie, who retired from a long, distinguished career as an educator last September.  They’ll be visiting their three daughters and their families more, and the couple has a fantastic Alaska cruise booked for July.

Steve plans to remain active — hiking, biking and working out at the gym. He hopes to climb 14,179-foot Mount Shasta, on the border of California and Oregon next year.

*Read more about Steve’s climb in his own words.