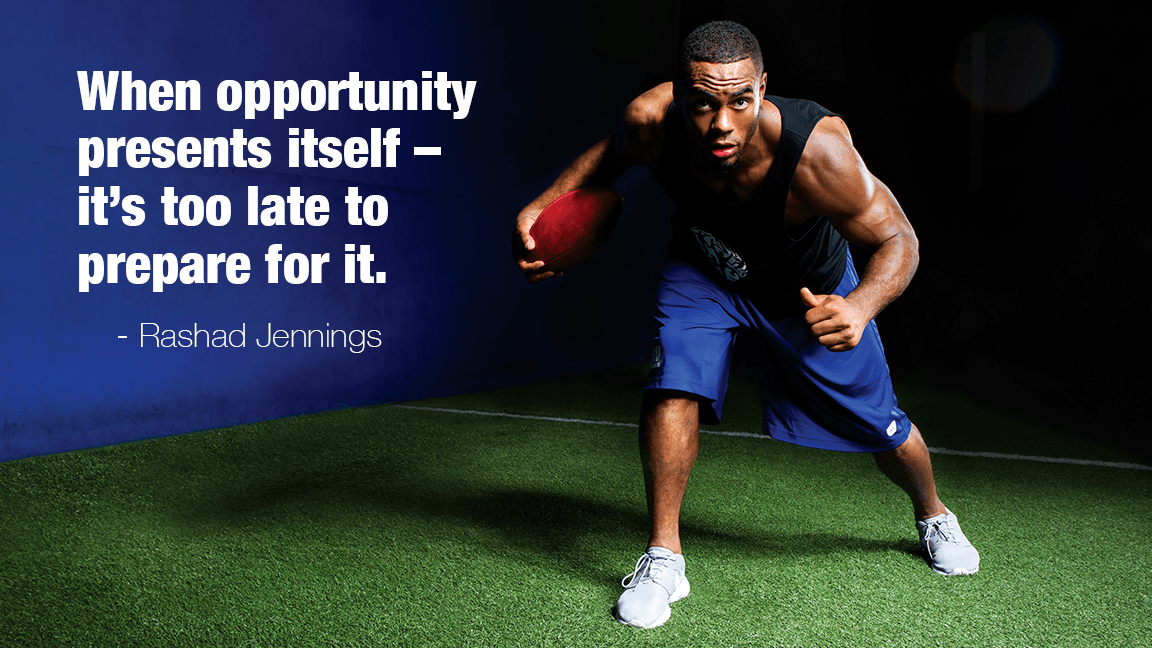 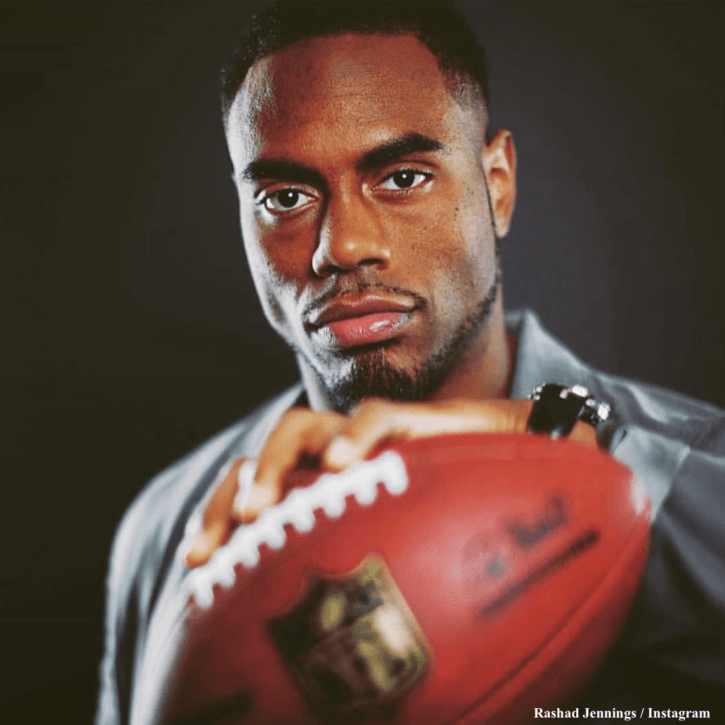 Rashad Jennings is a man of many talents.

From mastering poetry and archery, to learning how to play the guitar, fence and now dance. He’s taught himself how to do it all. In fact, when you ask him to describe himself in three words, the NFL running back will tell you that he’s a romantic and goofy autodidact. And while that’s not something you might necessarily expect to hear come from the mouth of a professional football player. It’s the very reason Jennings stands out from others in his field.

But his passion for learning doesn’t start and stop with the arts. He taught himself how to live a clean and healthy lifestyle. How to overcome barriers that most people would say are too high. And how hard work and dedication would help him achieve a career in the NFL.

Growing up, Jennings was what he describes to be a chubby overweight kid with glasses, asthma and a .6 GPA. Quite the contrast to the six-foot-one, 230-pound athlete he is today. And while he will be the first to admit that his bad attitude wasn’t helping him get the playing time he wanted. It wasn’t until a football scout saw potential in him that Jennings started to take ownership. He focused on his nutrition, education, and athletic dreams his senior year of high school. Senior year he charged forward with a new motto: when opportunity presents itself, it’s too late to prepare for it. And prepare is what he did.

He started running stairs at home and eight miles every day. Shed the extra weight and miraculously chased the asthma out of his body. He transformed from a fifth string benchwarmer to a college football star at Liberty University. Jennings dreams of playing in the NFL finally came to fruition in 2009. He was drafted by the Jacksonville Jaguars. He has since played with the Oakland Raiders and most recently the New York Giants.

While his transformation began over a decade ago, Jennings continues to improve himself mentally and physically while on the field, in the gym and even the kitchen.

A Clean and Healthy Lifestyle

When it comes to living a clean and healthy lifestyle, the self-proclaimed health nuts sticks to a strict gluten- and dairy-free diet. He also sleeps in a hyperbaric chamber before and after games to increase his oxygen levels. Yes, even while on the road. 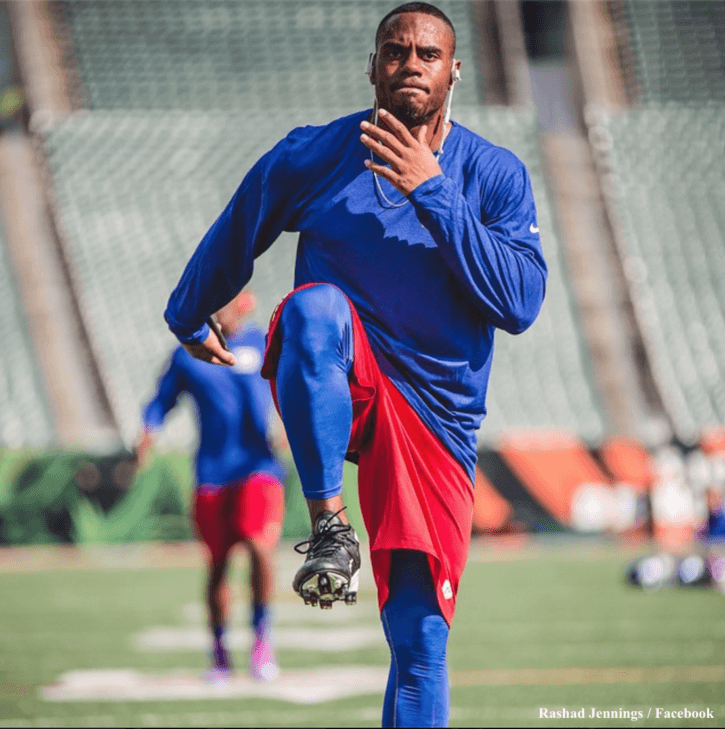 “It is important for me to continue to take care of my body throughout the season. The hyperbaric chamber is just one of the many ways I am able to do that,” he explains. “My teammates always like to joke and give me a hard time about my diet too, but eventually end up asking me for tips or the number to my chef.”

When Jennings discovered USANA during his second season with the Giants he began adding its NSF-tested nutritional supplements to his routine.  He became a Brand Ambassador for the nutritional company in 2014. Jennings understood, USANA was the perfect fit for his uncompromising lifestyle.

“USANA is a brand I can trust,” he says. “It’s both fuel efficient and I know that the products do not have any unforeseen side effects or ingredients in them that aren’t listed on its labels. They aren’t your average supplements and when you live a healthy lifestyle, you’ve got to find products that compliment you, and provide the nutrients that you need.”

Looking forward while also reflecting on his adolescent years, Jennings knew that he wanted to help kids in similar situations that he once faced. In 2013, he created the Rashad Jennings Foundation. The mission is to inspire youth by making education fun, providing mentorship for individual success, and promoting health and fitness worldwide. 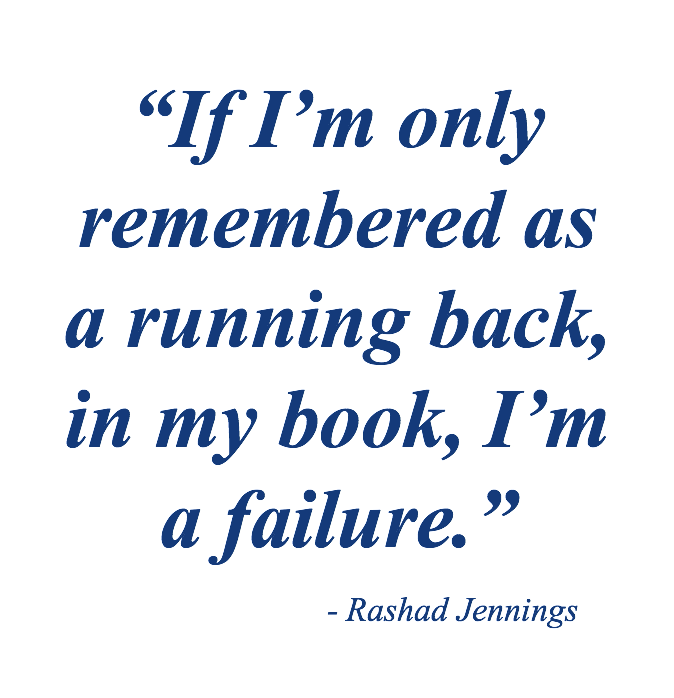 “I had to overcome many diversities to get to where I am today, which I owe completely to those who have supported and believed in me over the years,” says the 31-year-old. “Football has given me an amazing platform to change and give back to the community. And I’ve had the opportunity to meet some amazing people with many different cultural backgrounds.”

Always looking to assist others, Jennings was recently named a finalist for the 2017 NFLPA Byron “Whizzer” White award. He also played a large role during this year’s Super Bowl NFL Play 60 event.

So, what’s next for the man who dabbles in it all?

Right now, he’s preparing for his dance floor debut on this season of Dancing with the Stars in between trainings. Down the road he’d like to become a marriage counselor or maybe even a mayor. Truly, the possibilities are endless.

“Every offseason, I pick up a new fun craft to learn. This year I said I was leaning toward learning a foreign language or dance, and it just happened to be dance,” he says. “I love learning new things and enjoy the task of not knowing how to do something and learning how to do it on my own. I’ve learned that if I focus on something and make the time for it, I can do just about anything.”

And while Jennings is currently a free agent, don’t let his new off-season hobby fool you. Football is still and always will be his priority. With the journey he traveled to get to where he is today, he’s just learning more about what his body is capable of which he hopes to carry back on to the field with him next season.

“This journey has been amazing — both the boos and the cheers — and I welcome all new opportunities with open arms.”

In the meantime, be sure to catch Jennings on tomorrow’s episode of The Dr. Oz Show where you’ll see him speak about the importance of omega-3’s and USANA’s very own BiOmega™.

His go-to USANA® product: There are a lot of products I could say are my go-to USANA product, but I specifically like the SportsPak, because it helps support my energy levels throughout the entire day. His goal reaching advice: I am a goal oriented person. So I don’t believe in setting goals, because once you achieve them, that’s it. In order to be a goal oriented person, I have check points. I would suggest for someone working on their goals to find their deep-rooted why. This will continue to motivate them throughout their checkpoints and to keep them inspired throughout their journey.

His five favorite artists: If you truly have a love for music it’s impossible to say, but if I have to choose I will go with Frank Sinatra, John Mayer, Drake, Sam Hunt and Trey Songz.

The exercise he never skips: While there are many types of runners in the world, I myself am a hamstring runner because I am hamstring dominant. So stretching and activating my hamstrings is something I always do prior to practicing or playing.

His biggest inspiration: Throughout my career, I have to say my relationship with God has been my main inspiration.

Favorite social media channel: Snapchat. Give him a follow at @rashadjennings!

*The mentioned athlete is either a distributor or dedicated user who has received compensation for their partnership and/or complimentary USANA products.